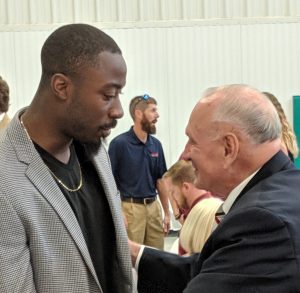 Lattimore used that voice Tuesday at the 3rd Annual Disability Employment Awareness Luncheon at The Ridge, speaking to a group of around 200 people. The central theme of Lattimore’s 30-plus minute speech was “facing adversity.”

“The question is how do we become comfortable in situations where our lives are altered?” Lattimore asked. “Pain and adversity is the universal constant that we all face. We have to accept that, number one, but we also have to be in a place where you give yourself a chance.”

Lattimore entered college following a storied and decorated career at Byrnes High School. He was the top running back in the state and chose Steve Spurrier’s Gamecocks over Auburn and other college football heavyweights.

After earning Southeastern Conference Freshman of the Year honors in 2010, Lattimore suffered a season-ending left knee injury against Mississippi State, which sidelined him for the remainder of the season. He worked his way back for his junior season, but suffered a horrific injury to his right knee against Tennesseee that ended his college career.

That injury dislocated the knee and tore every ligament while also causing nerve damage. After a part of two seasons with the San Francisco 49ers as a fourth-round draft pick, Lattimore retired from the NFL days after his 23rd birthday without playing a single down as a professional.

“My life was football,” he said. “When the game ended, I had no idea who I was. I lived with the illusion that the game wasn’t over for me for a year and a half, but football isn’t defining me anymore.”

Since the end of his football career as a player, Lattimore coached for one year at Heathwood Hall, a private school in Columbia, and is now director of player development at South Carolina.

He also spends time as a public speaker and is involved with those with disabilities and special needs throughout the state, finding inspiration from those he meets.

“You just realize that there is no excuse for, for anything,” Lattimore said of those with disabilities he encounters. “There is no should or would or could in their vocabulary. They truly believe life is just what it is.

“What I learned from the people at the South Carolina Vocational Rehabilitation Department with these students is that you determine your happiness.”

Lattimore said his faith in God has matured as he has. Instead of studying a playbook, he said he immerses himself in psychology and other educational pursuits.

“I reflect, and I write,” he said. “Reflection is so good for building the habit of being in the present.”

But Lattimire admitted that it wasn’t always easy – even when he put on a brave face for fans and friends.

Ultimately, though, he learned to accept that adversity is part and parcel, saying that, “when you learn to accept adversity, you accept life.”

“I learned to be comfortable with who I am and with my scars,” he said.