Clinton, SC – After about nine hours as a missing 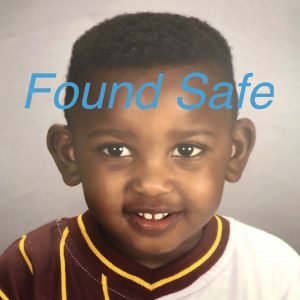 child, Elijah Henderson, the three-year-old toddler lost
Saturday morning Sept. 28 near Clinton, was found safe about 7:30 p.m. near his home.

“Elijah was found approximately two miles from the home,” said Laurens County Sheriff Office public relations officer Courtney Snow. “The sheriff had already dismissed most of the volunteers about 7 p.m. because with it getting dark, it wouldn’t be safe. Also the helicopter had infrared capabilities to assist in finding Elijah so we didn’t want to hinder that by having volunteers out.”

A volunteer who was still out found him, however, and Snow said all the family and extended family were still on the scene, and the reunion with Elijah was joyful.

“It was celebratory. There were tears of joy,” Snow said. “To see him found was a joyous experience. We are grateful for the hundreds of volunteers who provided assistance.”

During the day more than a hundred volunteers had come to try and assist in any way possible. Some were family and friends, such as friend Ken Turner, who closed down his S. Bell Street area snack shop to come help. Rhonda Gary,  a Whitten Center co-worker with Elijah’s mother, Reagan Henderson, and even staff from Elijah’s day care in Clinton came to lend support.  Neighbors who didn’t really know the family well but wanted to help came, as did total strangers.

“We’re from Clinton,” said Liza Dooley as she and a friend headed into the woods to be part of the grid search. “One thing about this town is when something happens we all come together.”

Those who were still on the scene were able to witness the family’s joy when after Laurens artist David Rhodes called for the toddler and he answered, and Elijah was quickly returned to his waiting family.

On facebook late that night, Rhodes posted his joy at being able to be part of Elijah’s rescue.

“Dear Lord, thank you for letting me win the biggest hide and seek game I’ve ever been a part of. In my eyes everyone there searching for that baby were heroes,” Rhodes said. “Glory goes to my God though.”