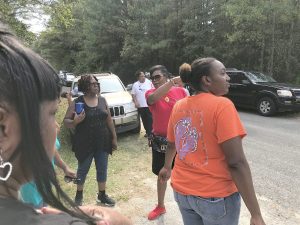 Elijah’s mother, Reagan Henderson, right, looks with others about 3 p.m. as the SLED helicopter lands in the nearby opening.
Photo-Judith Brown

Clinton, South Carolina – Hundreds of volunteers have walked dense woods alongside officers from several different law enforcement agencies today in an effort to find Elijah Henderson, the three-year-old who disappeared from his front porch about 10:30 this morning, Saturday, Sept. 28.

Laurens County Sheriff Don Reynolds said their call came in around 11 a.m. and many off-duty staff had already been there most of the day. Officers had canvassed the neighborhood asking for leads, and LCSO, SLED and DNR all took out tracking dogs prior to the volunteers, who worked in groups of five or six with officers in a grid pattern. 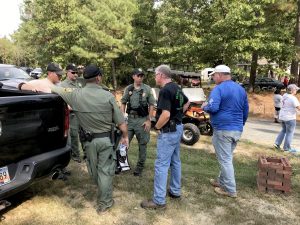 Laurens County Sheriff Don Reynolds, center, talks with officers, including several from the Department of Natural Resources, about using some of the hundred-plus volunteers in a walking grid pattern. Photo-Judith Brown

As of late early evening there was still no word on the child’s whereabouts, and even more volunteers were still coming to try and help the hundred or more friends and family who had spent most of the day with the family. 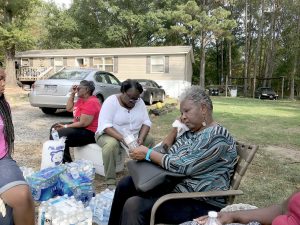 Family members of little Elijah Henderson, including his great-grandmother, Sarah Henderson of Greenwood, right, wait while volunteers are out walking through the woods looking for the missing toddler. Photo-Judith Brown

“He always plays on the porch with the dogs or with his truck,” said his grandmother, Deborah Henderson. She lives in the trailer with her daughter, Elijah’s mother Reagan Henderson, in a deeply wooded area at the end of Coleman Road off Apple Orchard Road. Both the women were at the house and Elijah was playing on the porch. Reagan fluctuated between being strong and breaking down, and as soon as sheriff deputies gave the go ahead to begin foot searches, she was in one of the early groups, looking for the toddler who disappeared wearing only a red shirt, pull up diapers and flip flops.

“He had just been out there a little while and he never leaves the porch,” his grandmother said. “He’s never wandered away.”

Reynolds said he had asked SLED to bring the helicopter in, and also received help from the Department of Natural Resources, Greenville Fire and Rescue, Clinton Fire, and later, Clinton police arrived. Because the woods are dense the SLED helicopter was using heat sensors, Reynolds said, but the afternoon’s high temperatures made for difficult readings.

“Everything comes up as hot,” Reynolds said. “It’s a real concern because he’s only three years old, and he couldn’t get far in just flip flops. And we’re losing our daylight soon.”

Reynolds said he had gone over all the people that family members might be concerned about and there was absolutely no one who might have wanted to take Elijah from their property, Reynolds said.

“We went over all of that and there’s nothing there.” he said.

Elijah’s’s father, Anthony Dandy from Clinton, was there, as were Elijah’s grandfather, Frank Henderson, who came this morning as soon as he heard from Greenwood. Elijah’s great-grandmother, Sarah Henderson, fought to hold back tears while she sat in the yard waiting for the volunteers to return.

“The waiting and not knowing is very hard,” she said.

By about 6 p.m., the groups were being redirected to begin walking another part of the property.