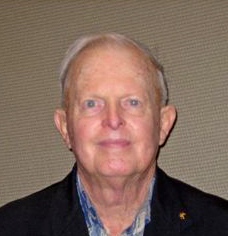 James Lewis Moorhead, age 80, of Simpsonville, passed away on Wednesday, September 25, 2019, at Greenville Memorial Hospital. He was born in Laurens, SC on September 7, 1939, and was a son of the late James Floyd Moorhead and Bennie Wasson Moorhead.

He is survived by his daughter, Robin Moorhead Kays and his son Timothy Earl Moorhead, both of Louisville, KY; as well as one brother and sister-in-law, David W. and Cecelia A. Moorhead of Simpsonville. He is also survived by two grandsons, Hunter Lane and Ben Lane; and one granddaughter, Hillary Grosse, all of Louisville, KY.

Jim enjoyed playing golf, especially during his retirement. For many years he served as a starter at the Hejaz Golf Club.

Jim graduated from Laurens High School in Laurens, SC and attended Clemson University, receiving a BS degree in 1962. He also earned a  MA degree from Furman University. During his Clemson years, he was captain of the Track and Cross Country teams. He also served as President of  Clemson’s Block “C” Club. In 2002, Jim was recognized at halftime of the Clemson-Ball State Football game as a representative of the Atlantic Coast Conference 50th year anniversary team. He was the oldest member of any team, meaning his accomplishments as a distance runner had stood the test of time.

The majority of Jim’s career was spent in education, having taught primarily in English and Science. He also coached teams in Track, Cross Country, and Football. He served as the Head of the English Department at Greenville Tech, as well as Director of Job Placement, Student Affairs and Financial Aid between the years 1964-1970. The second yearbook at Greenville Tech was dedicated to Jim.

He served for thirty years in the S.C. Army National Guard and the U.S. Army Reserves from 1962-1992, retiring as a Colonel. He was also a graduate of the Command and General Staff College of Hattiesburg, MS.

Jim was a member of Simpsonville First Baptist Church and a member of the Alice Smith Sunday School Class.

Memorial services will be held at 2:00 pm on Monday, September 30, 2019, at First Baptist Church of Simpsonville, SC.  A private burial will be held at Friendship Presbyterian Church Cemetery in Hickory Tavern, SC.