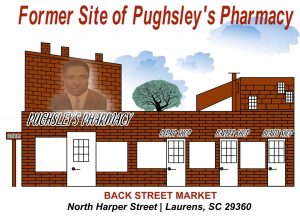 Family members, friends and former employees of “Back Street” businesses gathered Saturday just behind the Public Square to gather some of the history and remember the years before integration when the area around what is now 115 North Harper Street was the primary business center for the African American community in Laurens.

Dr. Ralph Pughsley’s Pharmacy offered not only prescriptions but also ice cream and soda and a place for social gatherings, said his daughter, Virginia Pughsley Wiggins, who was visiting from Ohio. The other buildings along what was known as “Back Street Market” included beauty parlors, barbershops and, eventually, the Harlem movie theater and other businesses across the street. 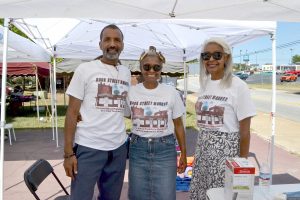 FAMILY – Out of state Pughsley family members Ralph Pughsley Miller and his aunts, Virginia Wiggins and Ralphine Pughsley, joined local family to share and gather Back Street stories with Laurens residents. They also raised $300 for hurricane relief in the Bahamas. Photo by Judith Brown

“There was the pharmacy, Irby’s refrigerator repair shop, the Williams cafe and the barber and beauty shops,” said Freddie Davenport, who had stopped by to talk with Pughsley’s daughters, Ralphine Pughsley and Wiggins and motioned to the areas where each business stood.

Virginia and Ralphine had traveled from their respective states of Ohio and Maryland to talk with people about the history of the area and to hear further stories about their own family.

“We left right after high school so we are sketchy on some of the details,” said Ralphine, working to remember just what businesses were where, and during which decade they were active. Ralphine had drawn out a map and a sketch of the Back Street Market area.

“When I was in Laurens last December and they honored my father at a Laurens County Democratic Party event, my plan was to collect information on Back Street and my father for the purpose of writing about him. I created the event and I wanted to have a presence on my father’s property,” Ms. Pughsley said. They gathered from under a couple of tents set up on the red concrete which served as the floor of the pharmacy.

The building had fallen into disrepair and the two sisters finally gave approval to have it torn down in March 2008. 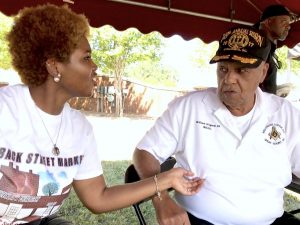 Throughout the day, people dropped by to talk to the Pughsley family, which also included his grandchildren, Ralph Pughsley Miller of Maryland and his sister, Cassandra Campbell of Laurens, who were helping their aunts gather interviews and hear stories. Her daughter Moriah Campbell, a fourth generation family member and a college student in Tennessee, recorded interviews on micro-cassettes or on her iPhone.

The consensus had been that they needed to call William Kilgore, who not only worked in the pharmacy with Pughsley but also held numerous other jobs at many of the businesses and was the local expert on Back Street history.

Kilgore explained just how important the Black-owned businesses were in those days before integration.

“Earl Franklin owned six buildings on that side and five buildings on this side, and he opened the first restaurant out of his house in 1939,” Kilgore said referring to the small still-standing building nearby. “So a black person could finally buy some food and actually sit at a table and eat it.”

Gradually, other businesses opened, including more cafes, service shops and the Harlem movie theater near the current corner between Smith Chevrolet and the city parking lot.

Pughsley had married and come to Laurens after World War II. He already had bachelor’s and masters degrees and spent a couple of years working for Mr. Franklin in his cafe and teaching at Sanders High School before he left to get his pharmacy degree at Xavier University in New Orleans. When Dr. Pughsley opened his pharmacy in 1954, Kilgore said, he got a backlash from white pharmacists in town.

“They said he wasn’t qualified so he had to close it again. Then in 1955 he went to Columbia and he got it straightened out and he opened back up in 1955,” Kilgore said.

While all the Back Street businessmen were hard working and successful, Pughsley served as an important mediator between whites and blacks in the community.

“He was a true man because he respected everybody but he demanded the same respect from them,” Kilgore said. “And that went for whites and blacks.”

Kilgore explained that when integration was finally coming, an attorney for Thurgood Marshall came through Laurens talking to business owners about the Civil Rights Act and what it would mean for them.

“He knew it would hurt his business. He knew it,” Kilgore said, explaining that Pughsley told him integration wasn’t as important as equality.