Laurens County Administrator Jon Caime and other local leaders are increasingly concerned and frustrated by the county’s litter problem. 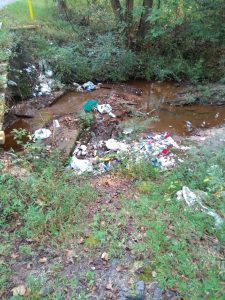 This creek adjacent to Wells Road in northern Laurens County is piled with trash from illegal dumping.

In an email, Caime included photos of a creek on Wells Road where illegal dumping of solid waste had occurred. The creek was inundated with trash.

“This very scenic road is shown in the attached picture where it winds across a creek on a county bridge,” Caime said. “Our citizens don’t deserve this selfish attitude of a few that don’t care. It hurts our pride in our community.”

Gray Court Mayor Stellartean Jones said a group of about 15 residents combined on Saturday, Sept. 7 to pick up 40 bags of trash from roadsides throughout Gray Court.

She lauded the group of local citizens for their efforts, but was frustrated by the aftermath.

“If you look out there now, you cant tell we did anything,” Jones said. “I don’t understand it.”

When Garrett McDaniel and Stewart Jones were campaigning for the South Carolina House of Representatives District 14 seat earlier this year, both said addressing the county’s litter problems was among the top priorities among voters.

Caime said it is a problem for the county, particularly as investors and potential new residents look at the northern parts of the county as a place to land.

“If we want people to move here, and they drive around and see this (litter), they may think twice before investing here. (Wells Road) also leads to the property of one of the largest taxpayers in Laurens County (ZF Transmissions),” Caime said. “If a visitor from another country was to tour around here before investing hundreds of millions of dollars in our community, they too might question that action based on what they see.”