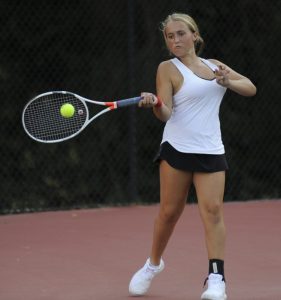 The Clinton Red Devils girls’ tennis team opened Region 3-3A play Tuesday afternoon at home, and came away with a 6-1 victory over the Union County Yellow Jackets.

Clinton swept all five singles matches and won the No. 1 doubles contest. The only match Clinton lost was at No. 2 doubles, where Kaitey Threatt and Grace Johnson lost 6-2, 3-6, 10-6.

The Red Devils got off to a hot start at No. 1 singles, where Mary Catherine Dailey defeated Anna Gregory, 6-0, 6-1. Dailey got off on the right foot when she broke Gregory in the first game of the match, with the help of a double fault on break point. Gregory had struggles with her serve for much of the night, serving seven double faults without an ace.

Both Mary Catherine Dailey and Chandler Dailey topped Gregory and James in the No. 1 doubles contest, 8-0.

J.L. Mann 7, Laurens 0: The Raiders had a tough go of it in Greenville, getting swept by the Patriots.

Anna Jenkins (No. 2 singles) won the most games of any player, taking four games, while the No. 2 doubles team of Skylar Douglas and Bella Burrafato also won four games in their match.

Anna Taylor had a strong passing day for the Raiders and Kayla Moore picked up five aces and seven digs to further help the cause, but the team’s offense and defense were a step behind throughout the match.

Madison Swindler had four kills, a block, and an ace, Addie Gibbs had three digs, and Grayson Taylor had two blocks in the loss.

COLLEGE SOCCER
ETSU 3, Presbyterian men 0: The host Buccaneers scored all three goals in the second half to hand the Blue Hose their sixth straight loss to open the season.

All three goals were scored within a span if 11 minutes, 40 seconds of the second half.

Valentin Kliebe had five saves for PC, while teammate Mark Zavalkov had two.

Presbyterian women 3, South Carolina State 2, 20T: PC picked up its first victory of the season in style, getting a goal from Morgan Hutchison from 8 yards out, off an assist from Sydni Dachs, to knock off SCSU in Clinton.

Dachs scored the match-tying goal off an assist from Hutchison in the 51st minute before setting up her teammate for the winner in the 105th minute. Carolina Dipzinski scored the other goal for PC (1-6).

Alyssa Leaman had one save in goal for PC.