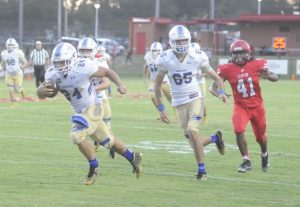 The Broome Centurions football team used a four-touchdown second quarter to effectively end the hopes for a Clinton victory Friday night at Wilder Stadium, pulling away to a 49-20 victory that sent the Red Devils to 0-2 to start the season.

Broome running back C.J. Littlejohn led the way with a 49-yard touchdown run in the first quarter, part of a 195-yard rushing performance on just 12 carries. K.J. Morgan added two touchdowns and Bryant Davis rushed for three scores. Morgan, the team’s quarterback, was 7-for-13 or 181 yards and a touchdown. He also threw two picks, one returned by Clinton’s Austin Caughman for a 30-yard touchdown in the third quarter.

Clinton’s Darian Bailey rushed for 69 yards to lead the Red Devils, while quarterbacks Davis Wilson and Navill Watson each threw two picks. Wilson also threw a 51-yard touchdown pass to Jeremiah Boyd that helped cut what had been a 30-point deficit to 36-20 with 11 minutes, 13 seconds left in regulation.