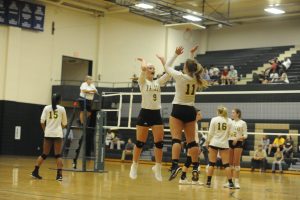 Laurens returned home after being swept in a road tri-match Wednesday night, held at T.L. Hanna, and found the home court was much more satisfying for the Raiders.

Laurens rallied from deficits in each of the three sets contested Thursday night against the Greenwood Eagles, pulling out a 25-15, 25-21, 25-22 victory that moved the team to 2-4 overall. The victory is the first region conquest of the season for Laurens.

Laurens started off the comeback in the first set, rallying from down 6-2 with a 16-4 run that gave the team firm command.

“Volleyball is a game of momentum,” Laurens Head Coach Erin Lake said. “All of a sudden we get one point, two points, then the shift happens. As soon as we can string two, three points along.”

The biggest comeback of the night for Laurens, however, came in the second set. Laurens trailed 6-1 in one stretch and was down 13-5 before a run of side outs between the two teams left the margin essentially unchanged. Laurens, sitting at a 20-14 deficit, finally got it going with a kill from Rebekah Smith that got the serve to Anna Taylor. Once Taylor served, she had four aces – including one that skimmed off the net to break a 20-all tie – during her rotation to help build a 9-0 run and give the Raiders the lead for keeps.

“We work on that,” Lake said of the 20-all serve. “That’s definitely one of the things we try – hit the tape and let it drop over – but Anna did a good job staying focused.”

Taylor finished the night with five service aces, to go with 10 digs.

The attackers for Laurens had a good night against Greenwood but are still working on getting the timing down with the setters. Mackenzie Ward did have a good night attacking for Laurens, though, picking up 11 kills. Callie Wzorek and Aubrey Wardell had good digging nights, picking up 14 and 13, respectively. Wzorek also had four aces.