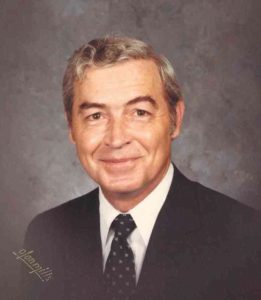 Born in Drayton, S.C., he was a son of the late Paul Julian Gwinn, Sr. and Helen Holmes Gwinn Weaver. He moved with his family to Laurens when he was in the 6th grade and was a graduate of Laurens High School. Paul was a US Air Force Veteran and an electrical engineer graduate of the University of South Carolina.  He retired from International Paper and was a member of First Baptist Church of Laurens.

Surviving in addition to his wife are: his son, Paul Julian Gwinn, III of Leesville; seven nephews; eight nieces; and numerous great-nephews and great-nieces.

In addition to his parents he was predeceased by three sisters, Mary Gwinn Cleveland, Rachel Gwinn Stone, and Betty Joe Gwinn Winn.

Memorial services will be held at 1:30 pm on Friday, September 6, 2019, at Martha Franks Rasor Chapel conducted by Rev. Rickey Letson.  A private burial will be held at Chestnut Ridge Baptist Church Cemetery with Military Honors.

The family will be at the residence and will receive friends at the Rasor Chapel immediately following the memorial service.