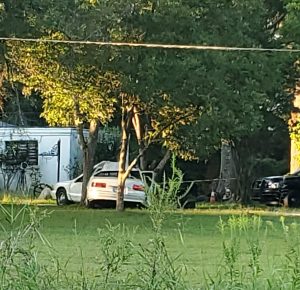 Laurens SC – The LCSO sent a release regarding the chase which ended in a wreck on SC Hwy 14 outside of Laurens.:

“Today at approximately 7 p.m., a Laurens County Sheriff’s Deputy attempted to make a traffic stop after observing an individual potentially involved in a drug transaction. The subject refused to stop for the Deputy and led a chase from Hillcrest Drive to Church Street, which eventually becomes Highway 14.

“Once the subject reached the 2600 area of Highway 14, he wrecked the vehicle and fled the scene. Our bloodhound was able to positively identify the location of the individual within the residence and the subject, Lawrence Woodruff, was taken into custody without incident. Deputies located a quantity of cash, marijuana, narcotics, and a handgun while processing the scene.

“Sheriff Reynolds said, ‘In just a short amount of time, our Bloodhound Team has proven to be invaluable once again,” Reynolds said regarding the deputies which work as handlers for the LCSO bloodhound. “I appreciate the time and effort put into this by all involved and I am grateful that everyone is safe tonight.’”