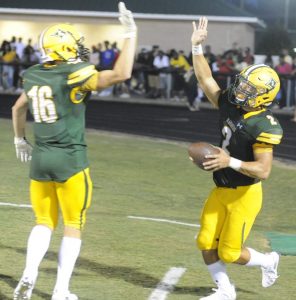 Nothing – not two early turnovers, not a brief power outage at K.C. Hanna Stadium – could derail the Laurens Raiders’ football team in its season-opening rivalry game against the Clinton Red Devils.

Quarterback Ryan Campbell rushed for two touchdowns and threw for another, Laurens gained 390 yards rushing as a team, and the Raiders used three second-quarter touchdowns to eventually pull away from Clinton, 28-0. Laurens is now 1-0 on the season, Clinton is 0-1.

Laurens first two offensive possessions of the season both ended in lost fumbles to Clinton, but the Red Devil offense could not cash in either time. One time a low 30-yard field goal was blocked, while the other time Laurens stopped Clinton on fourth-and-1 from Laurens’ 34-yard line.

Laurens, meanwhile, cashed in on a Clinton turnover early in the second quarter when Campbell rushed for an 8-yard touchdown with 57 seconds gone in the quarter, helping Laurens to a 7-0 lead. After forcing a Clinton punt, Laurens then got its second score when Campbell scored from 5 yards out to go up 14-0.

The big knockout play, however, came right before half. Laurens used seven plays to go 54 yards, the final play a 28-yard pass from Campbell to wide receiver Dee Foster, helping the Raiders to a 21-0 halftime lead.

Jeremiah Fuller added a 1-yard touchdown run with just less than five minutes to go in the third quarter to finish the scoring.

Jordan Woodruff led Laruens with 104 yards rushing, while Clinton’s Danny Kinard had just 33 yards to lead the Red Devils. Clinton was held to 149 yards of offense and was 0 for 9 on third down.

Clinton will host Broome Friday, while Laurens is slated to visit Myrtle Beach Friday – a game that could be impacted by the pending path of Hurricane Dorian in the Atlantic Ocean. Stay with The Laurens County Advertiser throughout the week for any updates on this game.

LA: The Crusaders of Laurens Academy got off on the right foot in their season opener at Todd Kirk Field, holding off a late charge from Northside Christian for a 50-32 victory.

Thomas Lowry had three touchdown passes and two TD runs in the game for the Crusaders, including a 50-yard scoring pass to Clarence Bertoli in the second quarter. Bertoli later added a 40-yard scoring run.

Laurens Academy is off next week but will return to the field in two weeks when it hosts St. John Academy.