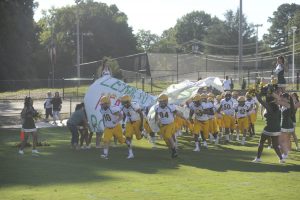 The Laurens and Clinton JV football teams got back to action Wednesday evening in the 2019 season opener for both teams, a game that ultimately came down to one fourth-down roll of the dice.

Clinton, facing fourth-and-2 from its own 35-yard line, went for the first down instead of punting to the Raiders with nearly 7 minutes, 30 seconds to go in regulation. When the play backfired Laurens went the rest of the field in four plays, culminating with a 3-yard touchdown run and a Brian Sheffield extra point with 5:25 left gave the Raiders a 13-12 victory at Wilder Stadium in Clinton.

Laurens won the game despite trailing 12-0 in the first half. One of the big momentum swings for the Raiders came on the drive that followed a 22-yard pass from quarterback Austin Copeland to Wilson Wages that made the score 12-0 with 1:41 to go in the first half. Laurens got a 29-yard kick return from Cayson Elledge to get into Clinton territory, and after a pair of runs set up second down at the Clinton 29 the Raiders cashed in with a touchdown pass from James Rawl to Jay Pulley. That helped make the score 12-6 by halftime, and gave Laurens new life.

“We had some adversity, some freshman guys were really nervous,” Laurens Head Coach Jawon Stephens said. “They didn’t fold. They were able to come back in the second half and make plays when we needed the plays we made.”

After a scoreless third quarter the Raiders’ defense held on third-and-10 when it allowed an eight-yard gain on a Copeland pass to R.T. Corley to set up the fateful fourth-down call that totally caught Stephens off guard.

“Very surprised they didn’t kick. Before the timeout they tried to freeze us. They went on a long count. Our guys didn’t jump offside,” Stephens said. “They come back out, we think they’re going to do the same thing and they ran a play. We’re just glad it was an incomplete pass.”

Clinton Head Coach Dontavious Glenn said, on the fourth-down call, they tried to catch the Raiders in a different defensive package, but on the play Copeland tried to hit Wages down the near sideline he overthrew his target to turn the ball over on downs.

Clinton’s only other touchdown came on a 1-yard first-quarter run by Jeremiah Smith.

Clinton takes on Broome next week, while Laurens battles Spartanburg. Both games are next Thursday.