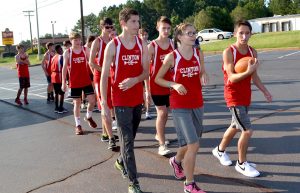 Laurens County, SC – Wilder Stadium’s ribbon-cutting ceremony marking the completion of the offseason renovations and construction isn’t scheduled until Sept. 6, but fans won’t have to wait that long to see the first football carry inside the stadium.

Clinton High’s cross country team will relay with Laurens High’s runners for the third straight year for the Running of the Game Ball, part of rivalry week festivities that will culminate with Friday night’s varsity football game between the two teams at K.C. Hanna Stadium in Laurens.

This year’s run will begin Thursday afternoon at 5 p.m. at the 50-yard line of Wilder Stadium in Clinton. Fans are asked to come out to celebrate the event, which will feature the school’s band and cheerleaders, and will be asked to form a fan-lined tunnel for the Clinton runners to start their journey with the game ball toward Palmetto Bone and Joint in Plantation Plaza on Highway 76.

The football will be carried by the longest-tenured senior once at the plaza, where the hand-off will be made to the Laurens runners, who will then take the football the rest of the way to the downtown public square and courthouse grounds.

“We feel this is a special event for us to start there,” Clinton Cross County Head Coach Lee Atkinson said. “For us to be able to have that event there is pretty neat for us.”

Laurens Cross County Head Coach Thomas Moore said his athletes enjoy taking part in the event, so much so that a former runner asked if he could take part in the event this year. Moore politely declined.

As for those team members, it is an early-season treat to participate in a gridiron tradition shared between the intra-county schools.

“The runners like it. They enjoy it,” Moore said. “It’s almost like a day off because they can run easy.”

Clinton High’s runners will exit Wilder Stadium and make their way to Adair Street, then onto Carolina Avenue and toward Highway 76, which will lead then to the Palmetto Bone and Joint office and the handoff. The runners will be accompanied by a police escort and use the right lane on Highway 76, allowing motorists to pass in the left lane.

The football is expected to arrive at Palmetto Bone and Joint around 5:55 p.m., and then at the Laurens square by 6:45 p.m. Fans are encouraged to come out to welcome the Laurens High cross country runners to the square as they deliver the game ball.

The football run has traditionally been done on Thursdays for the annual junior varsity football game between Laurens and Clinton but that game was moved up to tonight, Wednesday, Aug. 28,  at 6 p.m. at Wilder Stadium. The Friday night varsity game starts at 7:30 p.m in K.C. Hanna Stadium.