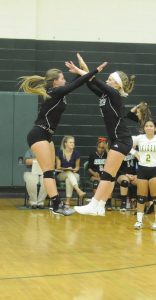 On a night when the Laurens Raiders’ volleyball team seemed to have full command of its season-opening match with the Clinton Red Devils Tuesday night, it took one final scoring burst to eventually put away its rival and leave its home court a winner.

Mackenzie Ward had nine kills and three blocks, Rebekah Smith had seven kills, and Callie Wzorek served up seven aces, as the Raiders swept their way to a 25-10, 25-13, 25-17 victory over the Red Devils at Laurens High. It was the opening match of the regular season for both teams.

Laurens never trailed against Clinton in the match, taking control early by executing on its own serve. In the first set alone Laurens did not have one serve rotation where it failed to score at least one point – and didn’t have such a scenario until the fifth point of the second set.

The Raiders more than held their own on serve against the Red Devils, registering 20 aces on the night.

“That’s our game plan. If we can be good behind the service line, and consistent, you eliminate the errors and see the aggressive serves that give us the aces,” Laurens Head Coach Erin Lake said. “That’s what we’re trying to do.”

Laurens also had strong attacks on the front row from Ward, Smith, and Rachel Delio, who were all part of a front line that proved tough to stop when the Raiders were on defense – and especially on offense.

“Laurens just has good swings,” Clinton Head Coach Mariel Cooper said. “I’ve got to work with my girls on reading those swings before they get over, and block those.”

While Laurens’ serving was doing well, Clinton’s struggled to find its footing. Clinton scored just seven points on its own serve in the first two sets to fall into a two-set hole, but it did find some success in the third set as it posted runs of 5-0 and 6-1 – scoring eight of the 11 points the Red Devils tallied on their own serve.

LA: Cambridge Academy took the first two sets from the host Crusaders and eventually pulled out a 25-22, 25-18, 23-25, 25-17 victory. It was the second straight loss for Laurens Academy after a season-opening victory.

“The girls played very well,” said LA Head Coach Shannon McGee in the loss. “I look forward to seeing Cambridge again. They have a good team this year.”