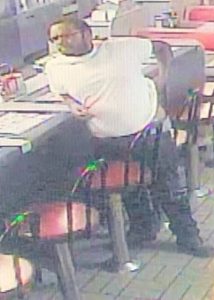 Laurens, South Carolina – The Laurens County Sheriff’s Office is seeking information about a suspect who allegedly assaulted two employees at the Waffle House on U.S. 221 N early Tuesday morning and as of Wednesday afternoon, there were still no leads.

An officer responded to a call about 6:40 a.m. Tuesday morning, Aug. 20 at the Laurens store and learned that a customer had assaulted two employees, but the suspect had fled the scene just before the officer arrived.

Employees said the man became irate, assaulted the two women and drove away on U.S. 221 toward Enoree, according to Deputy Jonathan Edwards.

The suspect was driving a white Volkswagen sedan with a sunroof and with Pennsylvania license plates. There is no other information known about him at this time, Edwards said, aside from the security camera footage which did not show the car’s license plate number.

At least one of the Waffle House employees went to the hospital to have her injuries checked.

The alleged suspect in the Waffle House assault was driving a white Volkswagen sedan with a sunroof and with Pennsylvania license plates. The security camera footage did not show the car’s license plate number.