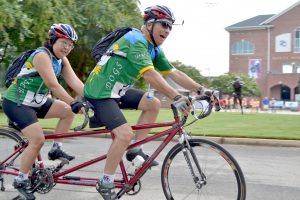 All photos by Judith L. Brown

Walt Willard and Claire Hamanaka of Hidden Lake at Cross Hill are typically riding along with other tandem bicyclists at rides like the Georgia Tandem Rally or the Southern Tandem Rally in Greenwood held in September.

This past Saturday, Aug. 10, however, they were among the 400 cyclists from Laurens County, across South 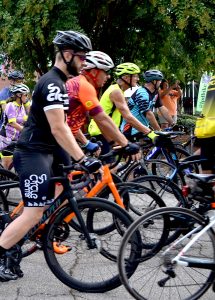 Carolina, and nearby states participating in the Flight of the Dove in Clinton, an annual fundraiser for Hospice of Laurens County held at Bailey Memorial Stadium at Presbyterian College. 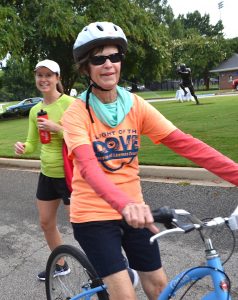 Hospice decided to move the ride up a week so as not to compete with some of PC events, and while it kept some riders from returning, the change gave others the chance to come for the first time.
Eduardo Rincon, the new men’s tennis coach at PC, rode the metric century, while his young daughters, Anna Marie and Kathryn, were accompanied in the 14-mile by their grandmother, Nancy Ramsey who was visiting from Florida.
They were among many coming to check out Flight of the Dove, which offers the 66-mile Metric Century, as well as a 50-mile, 30-mile and the family-friendly

14-mile.
“We had a lot of first-time riders, and we had some who rode because we have recently served their loved ones,” said Katie Bagwell, who was recently named as the manager of community engagement and volunteer services.
Teams such as the Prisma Health-sponsored team, Every Woman’s Cycle Team, brought several women who rode together in their bright pink jerseys, and the Laurens County Cycle Team always brings many local cyclists. 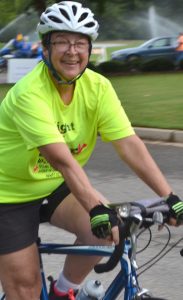 The 14th annual ride served, as it does each year, as the primary fundraiser for the non-profit Hospice of Laurens County.
“All of the proceeds go to our charity care patient program, which serves patients who are uninsured and underinsured,” Bagwell said. 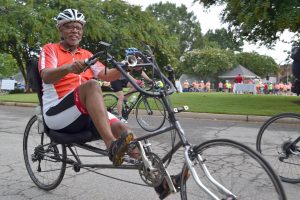 Total funds and sponsorships are still being tallied for this ride, and the staff is already making plans for the next ride.
“Next year will be our 15th annual, and we are making plans and getting excited about that,” Bagwell said. “We
do T-shirts each year, but for our 10th anniversary ride we did jerseys through Hincapie. We’ve had a lot of requests for those, so we are already looking into working through Hincapie again for jerseys for our 15th.”
Posted in News and tagged Clinton SC, Clinton South Carolina, Cycle Club, Cycling, cyclists, Flight of the Dove, fundraiser, Hincapie, Hospice of Laurens County, upstate SC