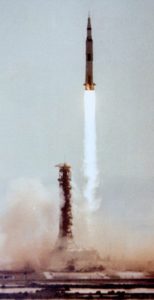 Laurens, South Carolina – Next Tuesday evening,  the Laurens County Library will host a speaker who will offer a glimpse of the many tasks which went into preparation for the moon landing, which celebrates its 50th anniversary on Saturday.

The free public program on Tuesday, July 23 at 6:30 p.m will feature NASA Solar System Ambassador David Leaphart, who will review some of the work which was required at NASA prior to launching Apollo 11. The library is located at 1017 W Main St, Laurens.

Leaphart has been a NASA Solar System Ambassador since 2018. He entered the space age at the time of the Mercury astronauts by founding and leading the Lockheed Model Rocket Society and he arranged group viewings of the first Saturn V launch, Apollo 4, 11, and 14.

Leaphart obtained two degrees in physics and did research in exoplanet orbits around binary stars, taught astronomy in graduate school and was student director of the Melton Observatory in Columbia, South Carolina.

His professional career was in computer networking, but he was able to use his physics training at MIT on aviation safety and early GPS for small airplanes and Leapheart is continuously involved in programs to educate and inspire the public on space science, its exploration, its discoveries, and its impacts on all of us.

The Solar System Ambassadors (SSA) program works with motivated volunteers across the nation to share the latest science and discoveries of NASA’s missions through a variety of events that inspire their communities. This program is free and open to the public.