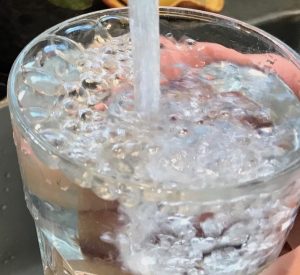 Laurens County Water and Sewer Commission and the Laurens Commission of Public Works are having an unwelcome moment of deja vu with the current water issues facing the providers. Quite a few customers each day are calling with concerns about the tap water’s “earthy” odor and taste, which has been found to result from geosmin.
Geosmin is the organic compound responsible for the earthy scent in the air when rain falls after a dry spell or when soil is disturbed, and it can be detected by humans at very low levels.
“In 2009, we had a geosmin issue,” said John Young, general manager of the CPW. “The levels were much higher then, and so the taste and odor were much worse, but it’s a naturally-occurring organic compound and it’s typical after times of heavy rains and warm temperatures like we have had.”
The good news is that the water is completely safe for drinking, cooking and other domestic uses, Young said, but it’s hard to determine when the water treatment facility will be able to take care of the problem. It received word Monday from a laboratory in South Bend, Ind., that geosmin was responsible. Technicians at CPW are now working with suppliers to find which filtration systems will get the water back to normal.
“As soon as we started getting complaints we sent them off,” Young said.
Samples were studied from the treated tap water, the CPW holding pond and at the source at Lake Rabon. All of the samples were found to contain varying amounts of geosmin.
Lake Rabon is owned by LCWSC, which then sells its water to CPW. In turn, CPW treats the water for its customers.
Some of the water treated at CPW’s treatment plant is then sold as treated water back to LCWSC for about 4,500 customers of its own, so the Lake Rabon problem impacts both utilities.
“What we are experiencing in Lake Rabon right now is actually common and seasonal, and Lake Rabon has been fortunate that it hasn’t happened every year,” said Jeff Field, executive director of the LCWSC.
Lake Hartwell had very high geosmin levels several years ago, Field said, forcing Anderson to spend about $25 million to install an ozone treatment system because its water treatment facility is so large.
“Lake Greenwood had high numbers in the 1970s,” he added. “Rain and temperature, it all has an impact.”
Field said LCWSC has also had calls, with 15 customer complaints coming in Monday, but there is little they can do at the lake to prevent it, so the LCWSC staff is communicating daily with CPW staff as CPW technicians determine the best way to filter the water.
Young asked that customers be patient, and explained technicians will be in contact with suppliers to determine what type of carbon should be used and at what dosage.
“I hope within a couple of weeks we’ll have it resolved,” Young said.
In the meantime, both Young and Field emphasize the fact that the water is completely safe.
“I know it’s an aggravation to some people,” Field said, explaining there is no reason for customers to install expensive filtration systems in their homes because the problem should be very short-lived.
Posted in News and tagged geosmin, Lake Rabon, Laurens Commission of Public Works, LCMA, LCWSC, water, what's wrong with the water