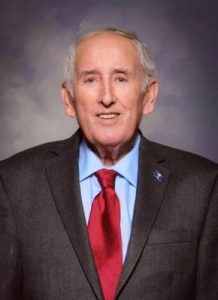 Friends and colleagues remembered Ted Goodwin Nash as a “Fountain Inn man through and through” following the former long-time Laurens County Councilman’s death this past week.

Nash, 81, died on Thursday, July 4. He was laid to rest Sunday at Harmony Baptist Church in Fountain Inn.

Nash’s health had been in decline for some time. After 16 years on council, he said his health issues were behind his decision to not seek a fifth term.

Despite his health problems, he finished out his final term.

“He was struggling there at the tail end of his term, and it was noble of him to continue to show up for meetings when he wasn’t feeling that well,” said Laurens County Administrator Jon Caime.

Prior to his election to county council, Nash served on the Western Carolina Sewer Authority Board. He was also a member of the Lion’s Club and a deacon and former treasurer at Harmony Baptist Church.

“He was very proud of the fire departments and the local development in the Fountain Inn area,” Segars said. “He was proud that that part of the county has led the way in our revival as far as economic development and things like that.”

Segars said he and Nash developed a friendship during their years working together for the county.

“He was very conscientious. He was honest, and he was plainspoken,” Segars said. “That’s what I liked about him. Very few people have contributed as much time and effort to Laurens County as he did.”

“He got his votes door to door, voter to voter,” Segars said. “He went to the barber shops, and he went to the rotary clubs and talked to people. That’s what he enjoyed.”

County Council Vice-Chairman Joe Wood sat next to Nash during county council meetings for years, and the two developed a friendship.

Wood said they often sized up issues affecting the county the same way.

“It seemed like we were always in sync, the way we voted,” Wood said. “We went to all the events together, and our wives became good friends. Before just about every council meeting, we’d have a conversation, usually over what we were going to talk about in the meeting. … He’s going to be surely missed.”

Nash was married to his wife, Joyce, for 62 years. He is survived by his wife and the couple’s two children, son Ted A. Nash and daughter Tammie Nash Younts, along with five grandchildren and four great grandchildren.

Wood recalled dinners and ensuing conversations with Nash and Segars after just about every council meeting during their tenure together and the other things Nash liked to do.

“He enjoyed working with his son in the heating and air business, and he was all the time working on his tractor,” Wood said. “I know many times he’d fuss about all the cats running around his yard, but I think he really liked them.”