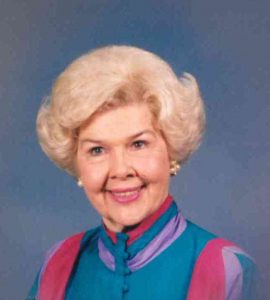 Carolyn Collins Burns entered into her eternal home on July 4, 2019.

Born in Ware Shoals, SC, she was the daughter of the late Grover Martin Thompson and Lydia Campbell Thompson.

Carolyn lived most of her life in Anderson and Belton, SC.  There she met and married William E. Collins.

While residing in Anderson, Carolyn was a member of Pope Drive Baptist Church.  In Belton, she was a member of Belton First Baptist.  She was active in W.M.U., her Sunday School class and enjoyed singing in the choir.  She also enjoyed volunteer work in the community, especially Meals on Wheels and helping with Sunday School classes at Patrick B. Harris Psychiatric Hospital.

Upon the death of her husband, Carolyn moved to Martha Franks Baptist Retirement Center in Laurens, SC.  After being there for a while she met and married Ralph M. Burns, Jr.  The courtship wasn’t a long one.  They joked that at their age a long courtship wouldn’t work!  They enjoyed twelve years of marriage before Ralph passed away in 2015.

While residing in Laurens, Carolyn was a member of First Baptist Church.  She was active in W.M.U. and Sunday School as long as her health permitted.

Carolyn was the last surviving member of her immediate family.  In addition to her husbands and parents, she was predeceased in death by sisters, Lucille Rochelle, Elaine Burrell Gambrell, and Russie Brooks, and a brother, William H. Thompson.

She is survived by stepchildren, Ralph M. Burns, III (Susan), Nancy B. Windley (John), and Anita B. Marco (Bill); six grandchildren and five great-grandchildren.  Surviving also is a special niece and namesake, Carolyn R. Baynes, as well as numerous nieces and nephews who were dear to her.

Memorials may be made to Family Promise of Laurens County, PO Box 1608, Laurens, SC, 29360, or the charity of your choice.