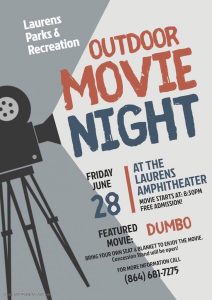 Laurens, South Carolina – The Little River Amphitheater, 205 Gordon Street, Laurens, will be the spot for a family movie tonight, Friday, June 28, night, a Saturday night family concert tomorrow and the annual Laurens Freedom Festival, offering plenty of entertainment options this week by the City of Laurens’ Department of Parks and Recreation.

The first event begins around 8:45 tonight, June 28, when Family Movie Night brings the new Disney’s “Dumbo” movie. Then the following night, Saturday, June 29, brings in an R and B band, offering an evening of free music by The Night Affair Band. 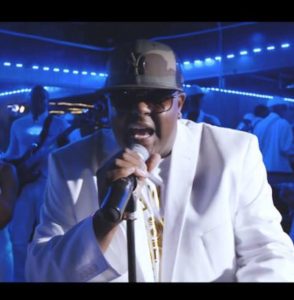 The timing is purposefully set right because tonight’s Finally Friday!, presented on the Downtown Square by Main Street Laurens and featuring The Shag Doctors, is coming to a close about 9 p.m.

“That’s exactly what we thought,” Pridgen said. “As Finally Friday! is winding down, we hope the families can stroll over to the amphitheater and go to a movie.”

Saturday night will bring Greenville’s rhythm and blues act The Night Affair Band from 7:30 to 9:30, and it’s also planned as a family friendly event, so no alcohol is permitted.

Then on Wednesday, July 3, Laurens will again bring its annual Freedom Festival, with local band Outshyne beginning its performance at 7 p.m. and playing a full concert until 9 p.m.

“We have enjoyed having a hometown band for our Freedom Festivals each year so far,” Pridgen said, “and as long as they are willing to come play for us, we’ll keep having them.”

A short patriotic presentation at 9 will be followed by the fireworks show at 9:15 p.m.

All of the events are totally family-friendly, and the city will not allow alcohol for these three summer events, Pridgen said.

“We want to keep that family atmosphere, but we will have our concession stands open each of the three nights, and we’ll also have food trucks here for the Saturday night concert and for the Freedom Festival.”