The special election to replace Stewart Jones on the Laurens County Council will be an all-GOP affair this summer.

Jennifer Garrett and W. Brown Patterson, Jr. both filed as Republicans to seek the District 4 seat on council vacated by Jones. The weeklong filing period ended Saturday at noon. 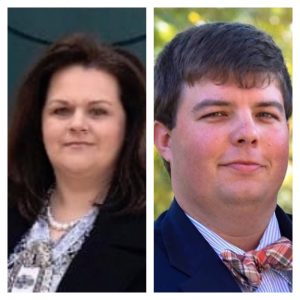 Garrett said she decided to run because she believes a change is needed in leadership to see the county grow.

“I decided to run because I feel like it’s time for a change,” she said. “We’ve had the same system for quite some time now, and it appears to be broken and I think it’s time to change things up. I think I’m the person to do that. In the past there’s been a lot of great talk about this project and that project and moving Laurens forward and Laurens growing, and we haven’t seen what I think we could see if we have the right people in office.”

Both Garrett and Patterson are entering the political ring for the first time.

Patterson, a territory manager for Outdoor Equipment Distributors, said he is ready for the challenge.

“I will represent Laurens County with integrity and professionalism,” Patterson said. “With multiple centuries of family history in Laurens County, I am well invested in this community. My main platforms are growing community, growing industry, maintaining accountability and transparency, continued support of our (agricultural) communities and increasing municipal relations countywide.”

The special election was necessitated when Jones was elected via special election to the South Carolina House of Representatives in District 14, the seat previously held by the retired Mike Pitts.