A puppy in the care of the Laurens County Humane Society recently got both a new home and a new mission as an emotional support and service dog for a U.S. Army veteran. 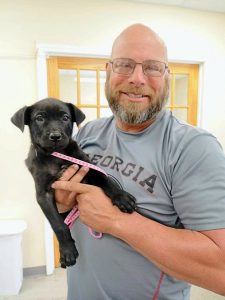 According to LCHS manager Lisa Wicks, Degone found Sage on an online adoption site frequently used by the LCHS.

“He came over and met her, and I think they he fell in love immediately,” Wicks said.

Attempts to reach Degone for the story were unsuccessful, but Wicks said Sage will be a emotional support service dog for Degone, a U.S. Army retiree who suffers from post-traumatic stress disorder (PTSD).

A training program for support dogs offered Degone a training slot if he found the right puppy for it.

Wicks said he believes Sage was the right fit for him and the training course.

According to CompanionsforHeroes.org, emotional support dogs differ from service and therapy dogs.

“Therapy dogs can have a variety of jobs … Service dogs help people with disabilities perform tasks, which helps the handler attain safety and independence,” a post on the website reads. “PTSD and psychiatric service dogs provide emotional support with people that have PTSD and other mental health conditions.”

Statistics from the website say that an estimated 20 percent of veterans who have returned from conflicts in the Middle East suffer from PTSD or depression.

“A recent upsurge of a simple relatively inexpensive technique has changed veterans’ lives for the better,” the post continued. “The solution comes with four paws, a wet nose and very specialized training: service dogs. Veterans who utilize service dogs report lower levels of depression and anxiety, fewer hospitalizations and numerous other benefits.”

While Sage was too young to exhibit particular traits that might make her a service dog, her breeding would suggest that she will do just fine at the job. German Shepherds are protective and the breed is a worker, particularly for police and the military, while Labs tend to be friendly companions.

“It’s been my experience that rescues exhibit the best traits of their breeds,” Wilks said.

While Sage is the latest be adopted for specialized training to help people, she is not the only one. Wilks said another rescue puppy was adopted from the LCHS several months ago as a service dog for a person suffering from diabetes.