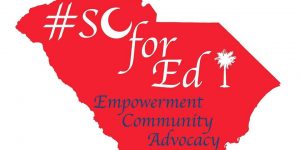 Around 60 educators from Laurens County School Districts 55 and 56 are expected to participate in today’s “SC for Ed” rally in Columbia.

The group SC for Ed, which uses red as its primary color, organized the statewide teacher walkout for today. A rally at the state Department of Education in Columbia was to begin at 9 a.m. and include a march around the State House grounds as well as several speakers leading up to a noon rally on Gervais Street. Educators are protesting low pay, crowded classrooms and extra duties built into teacher contracts with no compensation.

“We’re going to be in schools participating and taking care of our students’ educational needs,” said Murray. “It’s going to be business as usual.”

“We’re really pleased with the professionalism of our teachers and grateful to those who will be stepping in to ensure the safety and security of our students,” said Laurens County District 55 Superintendent Stephen Peters. “We expect to have a very productive day.”

Laurens County District 56 Superintendent David O’Shields said the idea for a “Red Out” was his own.

“Red clothes should be pretty easy to find here in Clinton,” O’Shields said of his idea to support at least parts of the “SC for Ed” agenda.

While O’Shields said the basic wants of “SC for ED” can be agreed upon, there is more that needs to be done as state lawmakers consider education reform.

“Our teachers are certainly underpaid. We all agree with that,” he said. “But raises from the state are not as inclusive as they need to be. It needs to include the paraprofessionals – our bus drivers, our cafeteria and maintenance workers – who are so valuable to what we do every day. … It should embrace more than just professional, certified staff.”

He also said simple pay raises also have implications at the local level and could leave as much as a $265,000 budget shortfall in District 56 when fringe benefits and other things are not included from the state.

“There are financial reverberations,” O’Shields said. “There are other things that aren’t always seen by the lawmakers.”

O’Shields also said there are things other than classroom size and salaries that need to be addressed as part of education reform, including what critics believe to be excessive testing and a lack of support for mental and emotional needs of students.

“We’re at a point where we need social workers or mental health workers in every school,” he said. “We can’t teach them if they have emotional or mental problems that keep them from learning.”

South Carolina Superintendent of Education Molly Spearman said in a release that teachers were “walking out on their obligations” to the state’s students.

“All can agree that areas of South Carolina’s education system are in need of improvement,” Spearman said. “I support teachers using their voice to advocate for needed change and share in their commitment to ensuring reforms become reality. However, I cannot support teachers walking out on their obligations.”

Spearman also said she will be filling in as a substitute teacher in a classroom today.