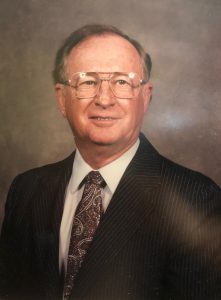 Walter James Hillard Rice, Sr., age 91, widower of his wife of 63 years, Mildred Tompkins Rice, passed away Monday, April 29, 2019 at the Hospice and Palliative Care of the Piedmont.

He was born in Gadston, AL and was a son of the late Donald Rice and Annie Lawson Rice. He lived in Waterloo the last eleven years but lived almost his entire adult life in Joanna, he worked in textiles early in his life as a supervisor/trainer in Joanna, Clinton, and Newberry Mills. He later on retired from Whitten Center and for 30 plus years ran Rice’s. He often said he started recycling long before it became popular and had to change from running a junk yard to running a recycling center.

He was a member of Fairview Baptist Church, and his passions were working, people, and Mildred’s cooking.

In addition to his wife and parents he is predeceased by his grandson, John David Rice, Jr. and he was the last survivor of his eight siblings.

The family would like to give a special thanks to their adopted family and caretakers, Relios Briggs, his Home Health Nurse, Teka, and Aid, Tonya.

A Memorial Service will be held Thursday, May 2, 2019 at 2 PM at the Gray Funeral Home Chapel in Clinton. The family will receive friends prior to the service at the funeral home from 1 to 2 PM.

In lieu of flowers memorials may be made to the American Cancer Society, 154 Milestone Way, Greenville, SC 29615, the Laurens County Humane Society, 793 Poplar Street, Clinton, SC 29325, or the charity of one’s choice.