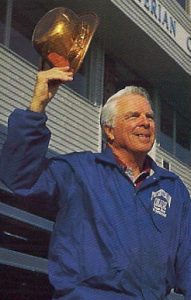 Former PC Head Football Coach Cally Gault doffs the Bronze Derby, the once annual prize between PC and Newberry. Gally died Friday at the age of 91.

Calhoun Folk “Cally” Gault, the man who became synonymous with Presbyterian College football and arguably the institution’s most recognizable alumnus passed away Friday. He was 91.

Gault, who graduated from PC in 1948, returned to his alma mater in 1963 and led the Blue Hose football program until 1984, winning 127 games and a pair of South Atlantic Conference titles. He stayed on as athletics director until 1995.

After 33 years at PC, he retired, but remained in Clinton and was a fixture at Blue Hose athletic events. He is survived by his wife of 69 years, Joy; his brother Marvin Gault, of Clinton; and his daughters Joy Gault Gruber and Emmie An Gault McLean along with five grandchildren and seven great-grandchildren.

A memorial service was held Monday afternoon at First Presbyterian Church of Clinton.

Gault’s influence stretched across generations of players at PC and at North Augusta High School, where he was named head coach in 1953. North Augusta won two state titles (1958, 1961) under Gault, who led the Lions on a magical 42-game unbeaten streak.

“Coach Gault was a huge inspiration to me and to all the young men who were blessed to play for him,” wrote former player Owen W. Barker, Jr., on Gault’s memorial web page through Gray Funeral Home. “As we’ve all moved into our adult lives, Coach Gault’s legacy lives on in the countless fathers and husbands he helped mold. He was a living example of a Christian-gentlemen. He will always be remembered as an outstanding coach, but he was much more to his players. He was a second father to us. The world is a sadder place without him.”

Gault was a member of the first class to be inducted into the Laurens County Athletic Hall of Fame along with good friend King Dixon. Gault is also a member of the South Carolina, Greenville and North Augusta athletics halls of fame.

“He was not only one of my mentors, but he was one of my closest friends,” Dixon said. “We’d grown very close over the years. We’d experienced a lot of good times competing against one another and attending national meetings all over the country together. . . . We have such wonderful memories together, but we can rejoice knowing that he is in good hands now, and that he is meeting a lot of old friends and former players again now.”

Dixon said he was coaching a U.S. Marine Corps team in the 1960s when Gault invited him to bring the Marines to Clinton.

“He said to bring the team to PC and said, ‘We’ll honor you and (wife) Augusta at halftime, and then we’ll whip your butts,’” Dixon recalled. “Then, they did just that.”