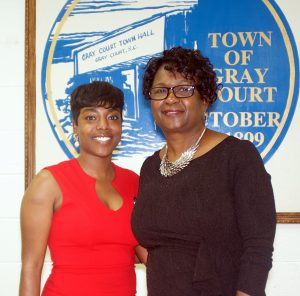 Newly elected Gray Court Mayor Stellartean Jones presided over a meeting of the town council for the first time since her election in March.

Jones was sworn into office Monday night along with newcomer town council Shaterica Neal and veteran councilman Adolphus Brewster, who will begin his 40th year on council.

“I thought everything went really well,” Jones said of her first meeting as mayor.

Malea Merck was elected mayor pro-temp with a 2-0-2 vote. Merck and Brewster abstained. Jones did not vote.

The meeting was also the first for Neal, 28, who became the youngest member on council. 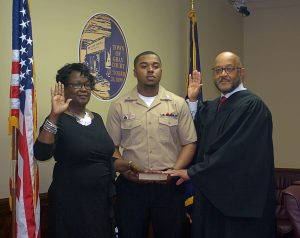 “I bring that millennial mindset,” Neal said. “I’m in the middle of two generations, so I want to be respectful of my elders and the council members we’ve had here for a long time. But I also want to be respectful of the community members and bring in those new ideas they are relying on me to bring and talk about. Just new ideas and visions and making new solutions to long-term problems that the town has been facing.”

She also said her work as a social worker should help her as a first-term councilwoman. Neal took the seat formerly held by Jones and ran unopposed.

During their regular meeting, council members voted unanimously to spend $6,089 on computer and security system upgrades for town hall.

Town Manager Garry Smith informed council members that they would be working on the fiscal year 2019-20 budget beginning at their May meeting.

Smith also said council should expect to look at projects that might be considered for Laurens County’s potential capital projects sales tax. County Council approved a referendum on the sales tax for the 2020 General Election.

Gray Court leaders are considering putting three projects up for consideration, including a beautification effort at Highway 101 and I-385, an extension of the Swamp Rabbit Trail and completion of the town park.

Gray Court will also host its annual Easter Egg Hunt this Saturday, April 20, at the town park. It is scheduled to last from 10 a.m until noon.