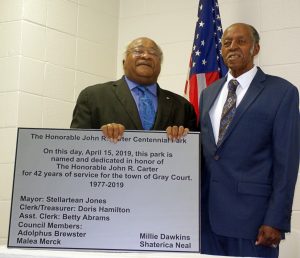 Former Gray Court Mayor John Carter typically delivered one-liners as he said good-bye to the office he held for 32 years.

“If anybody could give me a ride to the unemployment office tomorrow morning, I’d appreciate it,” Carter joked following the regular meeting of the Gray Court Town Council Monday night.

It was the first meeting of council not involving Carter in 42 years. He served 10 years on town council before being elected mayor. Stellartean Jones, who was sworn in as Gray Court’s mayor Monday, defeated Carter in a three-way race for mayor, and then topped fellow challenger Scott Cook in a run off for the town’s top office.

Carter, who has said he was inspired to public service after hearing a Robert Kennedy stump speech as Kennedy sought the 1968 Democratic nomination for president, challenging incumbent and old rival Lyndon Baynes Johnson, was lauded by local leaders, friends, family and peers during a ceremony and casual dinner that followed the town council meeting. 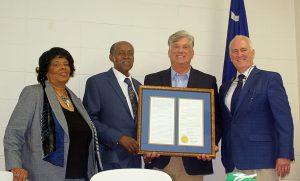 “We accomplished a lot,” said veteran Councilman Adolphus Brewster, who was re-elected to the council seat he has held for 40 years. “We got through the fire department quitting and the police department doing things they shouldn’t have been doing, but we’re still here.”

Brewster presented Carter with a replica of the sign designating Gray Court’s Centennial Park as the Honorable John R. Carter Centennial Park for his 42 years of service to the town.

State Rep. Mark Willis (R-Fountain Inn) and Gray Court Town Manager Garry Smith, who is also a member of the state House representing District 27 in Greenville County, gave Carter a concurrent resolution from the state House of Representatives and the Senate honoring his years of public service. 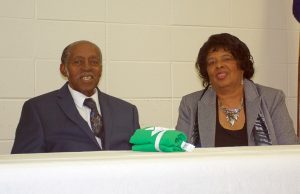 Jones, in one of her first official acts as mayor, presented Carter with a ceremonial gavel and plaque from the town.

“I’ve seen this kind of stuff happen on TV, but I never thought it’d happen to me in Gray Court,” Carter quipped.

He later said that he and wife Nancy will probably travel a little more, perhaps starting with a drive to Chicago and visits with family.

Nancy Carter also spoke at the ceremony, but said she was concerned about becoming “too emotional.”

“I told him today that this is the first day of the rest of your life. . . . Today is here, so we should use it. We’re going to finish our traveling and trust the Lord to protect us as long as he wants to keep us here.”