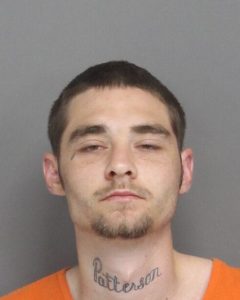 A Clinton man who allegedly carried a handgun into the Laurens County Hospital emergency room and shot a hospital police officer Thursday morning now faces attempted murder and other charges related to the incident.

Kevin Boyce Patterson, 27, is being held in the Johnson Detention Center without bond after being charged with attempted murder, kidnapping and pointing and presenting a firearm.

Sometime after entering the emergency room waiting area, Patterson allegedly forced his father, Bruce Patterson, across the waiting area before releasing him near an exit door, according to a South Carolina Law Enforcement (SLED) warrant charging Kevin Patterson with kidnapping.

Another warrant from SLED, which is investigating the incident, and a Prisma Health spokesperson stated that a man later identified as Kevin Patterson entered the emergency department with a handgun and was confronted by an officer from the South Carolina Highway Patrol and a Greenville Health Authority police officer.

Kevin Patterson allegedly shot the Greenville Health Authority officer, wounding him in the arm and resulting in the attempted murder charge. The officer returned fire and wounded the suspect.

The officer was treated and released from the Laurens County Hospital later Thursday.

Kevin Patterson was transported to another hospital treated and then taken to the Johnson Detention Center.

“Our team members acted quickly to protect those entrusted to their care and each other when faced with this rapidly unfolding situation,” said Justin Benfield, regional chief operating officer for Prisma Health–Upstate’s southern region, which includes Laurens County. “As Prisma Health team members, we are called to serve our community selflessly every day, but this morning our team members went above that daily call without hesitation. I am proud to count each one of them as part of the Prisma Health family. I’m especially grateful to the officer for his quick action which helped ensure the safety of our patients, team members and visitors.”

A Prisma spokesperson said the health care system’s security procedures will be under review following the incident. A release stated that Prisma Health-Upstate has “extensive procedures, training, staffing and equipment in place to help prevent and respond to workplace violence.”

“We hope an incident like this never happens again, but we must be prepared,” said Greenville Health Administration Police Chief Doug Horton in a release. “Part of that preparation is what we do, but it’s also the community being watchful. We are actively reviewing security protocols at our other campuses to ensure that this remains an isolated incident.”