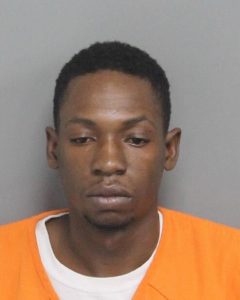 An Irmo man is charged with murder after allegedly shooting an acquaintance and dumping the dead man’s body roadside on I-26 at the Laurens-Newberry county line.

Ervin Chauncey Meggett, 22, is in the Johnson Detention Center on murder, armed robbery and possession of a weapon during the commission of a violent crime.

Meggett is accused of killing Malik Hosea Kluttz, 23, following an altercation while driving through Laurens County on a return trip to the Columbia area from North Carolina late Saturday night or early Sunday morning.

According to the Laurens County Sheriff’s Office, Kluttz was shot at least twice with a handgun. Meggett is also accused of taking money and a wallet from Kluttz before killing him.

Meggett was arrested in Irmo, returned to Laurens County and booked into the Johnson Detention Center Monday.

According to Kluttz’s family, who spoke with a Columbia TV station, the Kluttz and Meggett were friends and nearby neighbors, but got into an argument over money.

“(Meggett) had to learn the hard way,” said Garrett McDonald, Kluttz’s father said. “What he did, everybody is paying for it. Everybody. My son lost his life. Their mother and father lost a son. It goes on and on.”

A woman was also traveling in the car with Meggett and Kluttz and was uninjured, said Laurens County Sheriff’s Office Capt. Robert Wilkie.

She is considered a witness in the case, Wilkie said.

“Our thoughts and prayers go out to the family of this young man whose life was taken during this senseless act of violence,” said Laurens County Sheriff Don Reynolds. “We hope holding Meggett responsible for the death of their loved one will provide them with a sense of closure so they can begin the healing process.”

In addition to the LCSO and Laurens County Coroner’s Office, the South Carolina Law Enforcement Division (SLED), the Newberry County Sheriff’s Department, the Richland and Lexington County sheriffs’ departments and the Irmo Police Department assisted with the investigation and arrest.

“We want to thank all the agencies who assisted and helped get this guy behind bars so quickly,” Reynolds said.