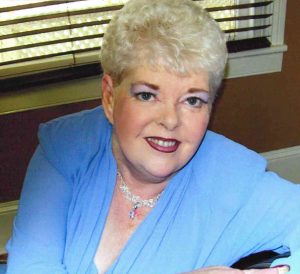 Jeri Danielle Walker-Boone, 68, of Laurens, formerly of Myrtle Beach, SC and Columbia, SC went to be with her Lord and Savior on Wednesday, April 3, 2019. Surviving her are her most beloved life partner, Eladio Cruz, Jr. of the home; her son Johnathan McClain and wife Laura of Los Angeles, CA who never abandoned her; a stepson, Michael Cruz of the home; and an estranged daughter Courtney Roberts. She also leaves behind a granddaughter who she never got to see while on this earth.

Born May 20,1950, in Clinton, SC she was the daughter of the late Shirley Walker-Boone of Laurens and Myrtle Beach and granddaughter of Fred and Blanche Walker of Laurens. Raised by her grandparents, Jeri went to Myrtle Beach when she was 12 to live with her mother, who was Director of Chapin Memorial Library for over 45 years.

She was a graduate of Myrtle Beach High School, Myrtle Beach, SC and of University of South Carolina. She was a graduate from the Universite de Strasburg in Germany with a Doctorate in Medicine. From 1976 until her retirement on disability, Jeri was the Assistant Dean of Academic Affairs and the Business Associate of Physiology and Pharmacology at the University of South Carolina School of Medicine in Columbia, SC.

A member of four United Methodist Churches during her life, in 2008 she joined Second Baptist Church in Laurens, SC where she was baptized at the age of 57. At that time Jeri claimed Jesus Christ as her Lord and Savior and was born again.

During her retirement, Jeri penned numerous poems which were published in prestigious arts journals and in Who’s Who in American Poetry. She was working on her memoir for publication up until she died.

Despite her myriad illnesses over a 25-year span of life, Jeri loved people and enjoyed friends from every venue where she lived as well as those whom she “met” on social media. Her parting words as she left this world were paraphrased from Edna St. Vincent Millay: “I burned my candle at both ends. It did not last the night. But, oh my foes and any friends, it gave a beautiful light.”

Funeral services will be held 3:00 p.m. on Monday, April 8, 2019, at Second Baptist Church conducted by Rev. J.D. Shiflet with interment to follow at the Walker Plot in Laurens City Cemetery.

Visitation will be one hour prior to the service in the sanctuary.

In lieu of flowers, memorials may be made to Second Baptist Church, 416 Fleming St. Laurens, SC 29360.