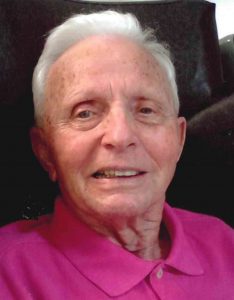 Born in Edgefield County, he was son of the late Lemuel and Irma H. Corley. Ed was a U.S. Air Force Veteran who served during the Korean War. After his service, he went to work for Western Union Telegraph then came to Laurens to begin a thirty-three year career in banking. Ed for many years was active in the community where he joined Lions Club, volunteered with Disaster Relief, and coached for many years with Little League Baseball. An active member of Gideon’s International for ten years, he was also an active member of Hillcrest Baptist Church.

Surviving in addition to his wife, are his two daughters, Lynne Brown of Greenville and Lisa Corley of Laurens; stepson, W. Scott Knight of Laurens; three grandsons, Benjy Brown, Tyler Knight, and Matthew Knight; and one sister, Nancy Turner of Johnston.

In addition to his parents, he was preceded in death by three sisters, Virginia Putman, Anne Christie, and Nita Taylor; and three brothers, William Corley, Eddie Corley, and Larry Corley.

Funeral services will be 11:00 a.m. Saturday, April 6, 2019, at Hillcrest Baptist Church conducted by Dr. Greg Hellams and Dr. Martin Riser. A private committal will be held in Forest Lawn Cemetery with Military Honors.

Family would like to express special thanks to Donna Blackston a devoted nurse who provided special care for 5 years, to Patriot Hospice who gave loving care, and the staff of Richard Campbell Veterans Nursing Home.