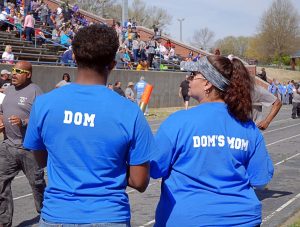 The Area 5 Special Olympics has a long tradition at Presbyterian College, and a pair of volunteers Friday had their own history with the games.

PC sophomore Dominiq Jones, who serves as PC’s volunteer services coordinator, led a group of PC students as volunteers for the games along with his mother, Diana Jones, who traveled to Clinton for the event.

“Friday was a blast,” said Dominiq “Dom” Jones. “Special Olympics has always been an important part of my life. I’ve been volunteering with my mother since I was a child. It made me feel proud that I was finally on the coordinating part of the games and that everyone had a great time.”

“It’s wonderful being there,” said Area 5 Coordinator Shelby Benson. “You know where the games are going to be. You don’t have to try and find locations, and PC does a wonderful job putting the games on. They’ve gotten it down to a science.”

Dom and Diana Jones, who are part of a military family and call Killeen, Texas home, wore volunteer t-shirts with the names, “Dom” and “Dom’s Mom” across the back.

Diana said her involvement with Special Olympics has spanned more than two decades.

Now, her sons are picking up the Special Olympics torch. 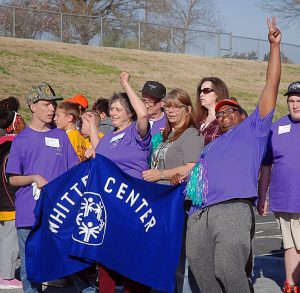 Special Olympians from Whitten Center get ready for the games Friday at PC. (photo by John Clayton)

“She has been taking me and my little brother to volunteer since we were kids,” said Dom, a psychology major pursuing minors in history and political science. “She instilled a sense of hard-work in us and in turn pushed me heavily to pursue the position on the coordinator team. This year, other than the Olympians of course, there was nothing more satisfying than seeing my mother helping out at the PC Special Olympics that I helped with the other fantastic coordinators to set-up.”

Benson said she has enjoyed seeing the Young Athletes program continue to flourish for children ages 2-7.

“It gives them the groundwork to start competing when they’re 8,” she said.

In the future Benson said Area 5 hopes to expand a motor skills event to allow more people, who may be more physically challenged, to take part in the Special Olympics.

As preparations were being made for the Area 5 games this past week, U.S. Secretary of Education Betsy DeVos announced that her budget for the upcoming fiscal year cut out $18 million in funding for the Special Olympics, completely defunding the program.

“I don’t worry about that kind of stuff,” Benson said. “We have people higher up who deal with all of that. I stayed focused on our athletes in Area 5.”

Dom Jones said his focus on the Special Olympics remained strong on Friday with his mother, who had urged him to take on a leadership role with PC’s volunteers, by his side.

“It made me feel proud that I was finally on the coordinating part of the games and that everyone had a great time,” he said.