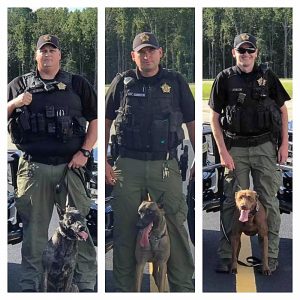 The Laurens County Sheriff’s Office grew its narcotics force by three this past week.

“The experience was great,” Atwood said. “We knew the dogs were going to do well. We trained every week to get ready for it, and they did great.”

Chop, a 3-year-old Chocolate Labrador Retriever, is a “big old goofball” at home, but has been a performer on the job.

“He’s done really well,” Atwood said. “He was a little sick in December, but since then he’s been great.”

“The dogs have great noses,” he said. “You just have to start reading what they’re doing. The waiting for the test was the hardest part. It was nerve racking, but overall we did pretty good.”

He said Albert catches some grief about his name, which is deemed by some as unusual for both a Malinois and a K-9 officer.

“I don’t need a dog with a tough name,” Garrison said with a laugh. “He’ll show them what kind of dog he is with what he does. He’s a high-energy dog. He loves to work and he loves praise.”

Diesel has the tough name, but is the only female in the trio and is its senior member as an 8-year-old Dutch Shepherd. She has been with the LCSO for several years and has spent the past year with Boyd as the two trained together.

“This is something I’ve always wanted to do,” Boyd said of working with a K-9 unit. “I like the idea of having a partner always with you – living with you and riding with you every day.”

He said Diesel may be the oldest of the new narcotics K-9 officers, but that doesn’t mean she is less energetic.

Diesel has actually been with the LCSO longer than Boyd, who joined the department three years ago, and he said the two have spent the past year learning about one another.

“I’m learning to read the dog, and she’s a whole lot smarter than I am,” he said. “I’ve learned to trust in the dog. She knows what she’s doing.”