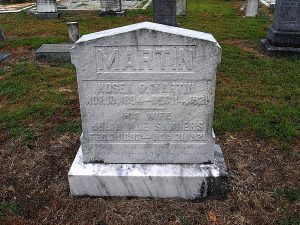 Laurens Police Officer Hosea Ocola Martin, who was killed in the line of duty just before Christmas in 1921, will receive the honors his current-day counterparts believe is long overdue.

Laurens Police Chief Chrissie Cofield said Martin’s nomination for the South Carolina Law Enforcement Officers Hall of Fame Memorial Room has been accepted. The Memorial Room induction ceremony is held on the first Wednesday in May each year.

“We got a response within a half hour of the post going up,” Cofield said.

Hosea Martin had been widowed about six months prior to the shooting, and the Martin children were reportedly split up after his death.

“We assume there are cousins out there,” Peyton Crowder said. “We think some of them moved out to California, and we assume that they had kids. The whole thing has a lot of us fascinated, so we’ll probably start doing some research.”

When Martin was killed on Dec. 14, 1921 at the age of 37, the U.S. was nearly two years into the prohibition era. Martin and other officers from the Laurens Police department and what was known as the Laurens Rural Police were involved in a car chase with two alleged bootleggers on Lisbon Road about seven miles outside of Clinton.

Martin was shot in an exchange of gunfire and later died at the Clinton Hospital. Luther Timmons and Monroe Willard were convicted of manslaughter in the case, and both were sentenced to 10 years hard labor.

“He was always ready to do his duty in every emergency of danger, and I can confidently say that our city has never had a more zealous, though kind and sympathetic officer, nor his brother officers, a cooler headed and braver comrade,” Crews wrote in The Advertiser.

Cofield said former Laurens Police Chief Robin Morse began the search for Hosea Martin’s family during his tenure with the city, but was unable to do so.

“This man gave his life for the service of the county and the city, and he needed to be recognized for that,” Morse said of the search. We wanted to get some of the family involved. I know it’s late, but this let’s them know that we don’t forget.”