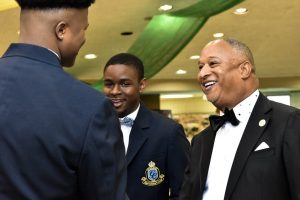 Laurens County School District 55 Superintendent Stephen Peters made an appearance in recently released documentary that was produced and aired by Trinity Broadcasting Network.

“We’re working in a system that is no longer aligned with the realities that students face,” Peters said on camera.

The documentary debuted on TBN on Wednesday, March 13, just one day before Peters hosted the District 55 State of the Schools Gala and Exposition at Laurens District High School.

“In the country there’s been a lot of talk about our public education system,” said Peters, who was flown by TBN to Louisville, Kentucky to film his part of the documentary. “We have teachers making too little pay and are facing so many more challenges.”

Peters and the other educators in the documentary discussed those challenges on camera, including the changing dynamics and roles of public schools and educators.

“People used to say that it takes a village to educate students,” he said. “But the villages years ago were dismantled. Many students don’t have the firm foundation of the family unit. Grandparents are raising some students. Aunts and uncles are raising some students, and we’ve had older brothers or sisters raising their siblings. We have to meet that challenge and raise some children as well as educate them.”

Laurens County School District 55 to inventory of and celebrated its present and looked toward the future Thursday night at its State of the Schools Gala and Exposition held at Laurens District High School.

The theme for the gala was built around “synergy,” which is a recurring theme for Laurens District 55 Superintendent Stephen Peters.

“I’ve been talking about synergy since I got here three years ago,” Peters said. “We have opportunities in education here, but we have to anchor the opportunities we have through synergy by putting our efforts together.” 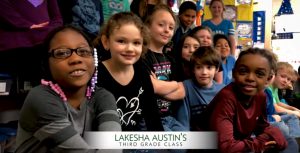 A video still from the This is Laurens production introduced Thursday night at the District 55 State of the Schools Gala.

In addition to entertainment provided by various student groups and students, the district unveiled a new three-minute video called, “This is Laurens – Synergy.”

The video, which was created and produced by District 55 Activities Director Bryant Kirk White, shared Peters’ view on synergy with interviews involving District 55 students and educators.

“My message (Thursday) was that we are excited about the possibility of what the school district can be,” Peters said. “The video encompassed that.”

He pointed to successes such as the Gentlemen’s and Ladies’ Clubs throughout the district that have doubled in size to around 1,200 students since their inception three years ago. But Peters also outlined challenges ahead for the county and the state.

“The mental health piece is impacting schools not only here, but everywhere in the world,” he said. “Young people are facing mental health challenges at a rate we’ve never seen before.”

In an effort to create the “synergy” Peters said is necessary for continued success, the district is hosting a district-wide parents meeting on Saturday, March 30 at Laurens Middle School. The first such meeting, held last year, was sparsely attended, but Peters hopes for increased involvement as more meetings are held.

“There can be no partnership if two sides aren’t there,” he said.

Even with challenges and the great unknown of a education reform bill in the state legislature, Peters said he wanted to share positive happenings in the district at the gala.

“We’ve been putting people in place in every school, and I’ve got some smart people working with me,” Peters said. “We’re positioned to take the district forward for the next five-to-10 years, and we’re excited about that.”