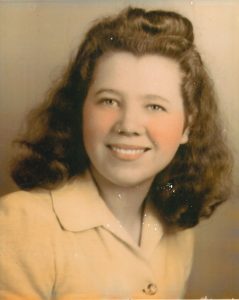 Born in Carthage, NC in 1924, she was the youngest child of Hugh Archibald McCrimmon and Laura Barber McCrimmon. Just two years later her parents divorced. She went to live on a dairy farm with her aunt Carrie Mae Barber Davis and Uncle Marvin Davis while her older brothers Hugh Archibald and John Cole McCrimmon were sent to the Barium Springs Home for Children.

In 1941, Wilma was valedictorian of her graduating class at the Farm Life High School in Moore County, NC. She married her high school sweetheart Fred Walter Seward in January 1942 just weeks after the Pearl Harbor attack. The young couple moved to Wilmington, NC so Fred could work in the shipyards building battleships for the war effort. Their daughter Carolyn Ann Seward Mullen was born in 1943 and their son Fred Larry Seward was born in 1945. After the war, the family moved to Charlotte where Fred began his career selling Tony hair care products.

Professionally, Wilma is remembered for co-founding Seward Graduation Services and the South Carolina Cap & Gown Company with her husband. The family moved to Laurens, SC in 1955 when Fred began working as a manufacturer’s rep selling class rings for Jostens at schools throughout South Carolina and North Carolina. Since ring sales are a seasonal business, they added cap and gown rentals to their service offering.

As the business grew, they opened a factory to manufacture “treasure” gowns, which students purchased and kept instead of renting for graduation. As president, Fred managed sales. As vice-president, Wilma managed everything else: the factory, the office, the employees, operations, finance, marketing, and order processing.

In 1976 Fred’s health began to fail. They sold the factory to Jostens, a Fortune 500 company. After his death in 1977, Wilma took over the ring sales territory and led Seward Graduation Services’ ring sales business until her retirement. Today, the businesses they founded live on and continue to employ hard-working South Carolinians.

Despite her hectic work schedule, Wilma was committed to serving her community. She was active in the Chamber of Commerce, the First United Methodist Church, the Ladies Golf Association, and the Order of the Eastern Star.

An avid sports fan, Wilma not only had an encyclopedic knowledge of her favorite teams and players, he was an active member at both Lakeside Country Club and the Musgrove Mill Golf Club. She passed her love of golf to her son, who won the first full scholarship for golf ever awarded at the University of South Carolina.

But her true love was college football. For years she and Fred were season ticket holders at both South Carolina and Clemson. She also made weekly trips to Athens, GA to watch her other favorite team, the Georgia Bulldogs. She knew every player, every recruit, and an astonishing array of stats and plays. Each week, she baked several chocolate pound cakes and dozens of deviled eggs friends’ at Judd and Betty Farr’s weekly UGA tailgate parties. Over the years she supported her favorite teams attending hundreds of games home and away including bowl games, tournaments and championship games around the country:

“Honey,” as she was called by her grandchildren and hundreds of the people who knew and loved her, was always game for something adventurous and fun. She took powerboating courses and mastered the fine points of pulling water-skiers. In 1988, she went backpacking and riding the trains through Europe. She went on road trips to beaches and mountains cabins with her friends.

A Funeral service will be held on Sunday, March 24, 2019 at 4 PM at the First United Methodist Church in Laurens. The family will receive friends immediately following the service in the church Fellowship Hall.