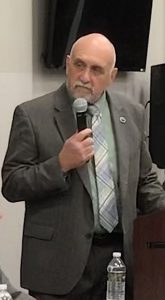 Laurens County, S.C. – Deep into a controversial confirmation process in Columbia,  retired District 14 Rep. Mike Pitts has decided to withdraw his name from consideration as director of the South Carolina Conservation Bank.

“It is painfully clear that my health is being negatively affected, and the stress of the confirmation process will not subside,” Pitts said.

In a previous story, Pitts explained that his voting record showed one vote he had not realized he had cast after he had recused himself from any Conservation Bank bills and decisions.

Pitts has said in previous interviews that he had assumed the possibility of taking a position as the director of the South Carolina Land Conservation Bank would ease the pressure after a heart attack forced him to step down from the State House of Representatives. More than two weeks into the confirmation hearings, however, Pitts said he realized this new pressure was negatively impacting his health and might do the same to the agency he believes is very important to the state.

In a press release sent out Monday morning, Pitts told S.C. Conservation Bank Board President Doug Harper that he would withdraw from consideration based on several factors, including his post-heart attack health. Even before his heart attack and surgery in October, several board members at the agency had asked Pitts to consider applying for the post due to his support for the agency’s work. The Conservation Bank has been without a director for more than a year, and Pitts has long been an advocate of preserving some of the state’s natural land through land trusts.

Pitts came under criticism from Democratic and some Republican Senators who questioned the timing of the job offer coupled with his resignation from the state legislature. The stress from the difficult hearings were causing more heart pain, Pitts said, but he also voiced concern that the growing confrontational aspect in the confirmation hearings could cause potential damage to the merits of the state’s conservation bank.

“I believe continuing pursuit of my confirmation with the divisive bitterness it has caused may damage the future of this vital state agency and I sincerely do not want that,” Pitts said. “My will to fight is strong but my ability is not.”
Look for more on the hearings in the Wednesday edition of The Laurens County Advertiser.
Posted in News and tagged conservation, District 14, forests, land trust, Mike Pitts, natural resources, Rep. Mike Pitts, South Carolina Conservation Bank, undeveloped land