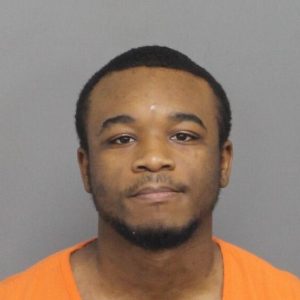 A bench warrant led to the arrest of a Fountain Inn man Thursday on felony animal abuse charges by the Laurens County Sheriff’s Office.

Laurens County Sheriff Don Reynolds and a deputy arrived at the Durbin Road residence to serve a bench warrant  for domestic violence on Takevious Danglo Anderson, 22, after receiving an anonymous tip as to Anderson’s whereabouts. The tipster also said there was possibly a mistreated animal at the residence.

Upon arrive just before 7 a.m. Thursday, Reynolds and his deputy discovered an emaciated gray pit bull puppy outside the residence. The puppy was reportedly found cold and shivering, lying in a doghouse with no roof and only hay for bedding. The LCSO report stated that the dog wore a collar that was too tight and had no food or water.

“Anyone who could do this to an animal, or another human being is simply evil,” he said. “This isn’t something that happens over night or goes unnoticed, so this guy knew what he was doing to this poor animal. This will not be tolerated by the Laurens County.”

After being fed by Reynolds and the deputy, the dog was turned over to Laurens County Animal Control, which also responded to the scene, and has received veterinary care.