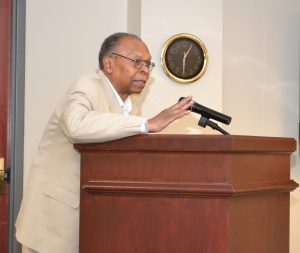 Willie Paden said that perhaps there was a bit of a mistake when he was honored last Tuesday night by members of Laurens City Council, since he claimed others had sacrificed more than he did when many in the African American community began working toward single-member districts in the 1980s for the City of Laurens and Laurens County.

“If it was not for Mr. Paden, I would not be serving on city council and no other African American would be serving here, and he paved the way for all of us,” Miller said.

“It’s more than me who deserved recognition,” Paden said, explaining that in the early 1980s, two different petitions to request litigation to change the at-large council systems to single member districts.

Eventually the American Civil Liberties Union and the NAACP took up the fight for the Laurens County residents, but not until several local petitioners had lost their jobs because of their signatures on the controversial petitions.

“I was in the union at Laurens Glass, and the union protected me, but others really sacrificed,” Paden said.

John Carter had already been elected to a town council seat under the at-large system in Gray Court and Luther Craine had been elected at-large in Laurens, but Carter said it was extremely difficult for that to happen.

“I came onto council in 1976 but that wasn’t really possible elsewhere,” said Carter, who is now seeking a tenth term as mayor of Gray Court.

“I follow after some great people,” Paden told council and the audience Tuesday night. “John Carter, Ulis Byrd and others. All these awards I’ve won, some of them belong to them because they did all the work.”

Their efforts work finally resulted in African American representation on county council and the city councils by the late 1980s.

“Black History is part of American history,” said Sullivan, who recognized Laurens County District 55 Superintendent , Dr. Stephen Peters. “We are making history tonight, and there have been many who have shaped this history.”

“I graciously and humbly accept this award on behalf of all the hardworking teachers, administrators, cafeteria workers, bus drivers, secretaries, teacher assistants and all the staff of District 55,” he said. “I wouldn’t be standing here had it not been for the hard work of those closest to the work.”

Paden has long been retired but he doesn’t want to retire from community involvement.

Council member Sara Latimore said there are many who have served and are gone, but she thinks it’s also important to honor those still employed as leaders in the city, as she called up Laurens Police Chief Chrissie Cofield.

“Thank you for entrusting me to be a leader and the police chief in the city,” Cofield said. “It’s a wonderful feeling knowing that you can entrust your employees, knowing that they are going to do their jobs because they are trained well and are doing everything are trained to do.”