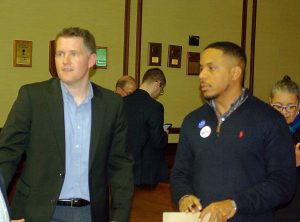 Both candidates are currently sitting members of the Laurens County Council.

Jones finished with 1,247 votes – 51.6 percent of the ballots cast district-wide – to avoid a runoff for the GOP nomination. Jones was part of a crowded field with Laurens businessman Michael Seymour, Grant Blair and Scott Horne. Seymour finished second behind Jones with 24.9 percent of the vote. Horne, a Ware Shoals businessman, garnered 18.9 percent and Ninety Six’s Blair 5.6 percent among the Laurens County precincts.

McDaniel won in a landslide, earning 92.4 percent of the vote among Democrats. He finished with 451 Laurens County votes, while 39 votes went to Bobby Gregory, Sr.

Results are unofficial until the election is certified by the South Carolina Election Commission Thursday. The seven votes cast from the Barksdale-Narnie precinct were not counted Tuesday night due to a glitch with the electronic ballots.

McDaniel and Jones will face one another in the special election scheduled for April 23. The special election was necessitated by the resignation of Mike Pitts, who cited health reasons after suffering a heart attack in late October, just before winning a ninth term in November’s general election.

Jones, who just began his second term on county council representing District 4, said he was relieved to not get the runoff he expected heading into the primary election.

“I really didn’t know with the weather especially what kind of turnout we’d have,” Jones said. “I just want to thank all the supporters, the volunteers, the donors – everybody who has contributed so much effort to the cause of liberty. We’re going to take transparency and limited government – that message to Columbia.”

McDaniel, who sits in the same District 3 council seat once occupied by his late father, Ed McDaniel, now challenges for a seat occupied by Pitts, a conservative republican for eight straight terms.

“We’ve got to get more voter contact and directly contacting more people and making them aware. I noticed today via Facebook posts and phone calls that people didn’t even know that there was an election today, so I think that’s the major thing we need to focus on.”

The numbers from a rainy Tuesday bear out McDaniel’s theory. According to numbers from the South Carolina Election Commission, 2,917 votes were cast across the district, which has 79,551 eligible voters for a turnout of 3.67 percent.

The District 14 special primary election was the first round of a busy election season over the next two months.

Municipal elections are set for Tuesday, March 5 and will fill mayoral spots in Clinton, Laurens and Gray Court. After that, the District 14 special election is set for April 23.