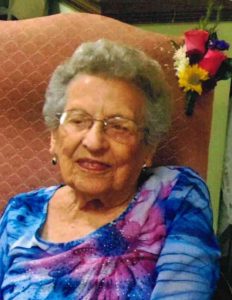 Essie Summer Mills, age 100, formerly of Henderson Lane and a current resident of Martha Franks Baptist Retirement Community, and widow of James Otis Mills, passed away on Saturday, February 16, 2019, at The Hospice House of Laurens County.

Born in Newberry County on August 2, 1918, she was a daughter of the late James Franklin and Emma Johnson Summer. She was a graduate of Ninety Six High School and Draughon’s Business College in Columbia, SC. She was a homemaker and worked after her children were grown at First United Methodist Church Child Development Center for 16 years. She was a loyal member of First United Methodist Church in Laurens, a member of the VFW Post 3354, and the American Legion.

She is survived by her two children: Teresa Mills Crabtree (Buck) and Bruce F. Mills both of Laurens; grandchildren, Adam Mills (Jessica) of Laurens and Blake Mills of China Grove, N.C.; great-grandchildren, Daniel and James Mills of Laurens. She was affectionately known as “Nanny” to her family. She is also survived by one niece, Gera Singletary (David) of Columbia; and two nephews, John Taylor of Anderson and Jimmy Eargle of Columbia.

In addition to her husband and parents, she was predeceased by her sisters Myrtle S. Eargle, Maron S. Eve, Colie Summer, and Gladys S. Taylor; and a brother, James Summer.

Funeral services will be at 2:00 PM on Tuesday, February 19, 2019, at Martha Franks Rasor Chapel conducted by Rev. Dr. Lawton Neely and Rev. Emil Finley with burial to follow in Forest Lawn Cemetery.

The family will be at their respective homes and will receive friends at Martha Franks Rasor Chapel one hour prior to the service.