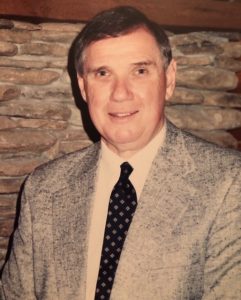 Sonny was a graduate of Anderson Boys’ High School (now known as TL Hanna High School), class of 1953. After graduation, he attended Clemson on a football scholarship from 1953-1955. He continued his education at Presbyterian College and graduated in 1958. While there, he played football and baseball, was a member of the Kappa Alpha Order. Sonny started his coaching and teaching career at Clinton High School (1958-1959) where he served as Assistant Football and Basketball Coach. He joined Honea Path High School from 1959-1961 as Assistant Football Coach and Head Basketball and Baseball Coach. He became Head Football, Girls’ Basketball, Track and Tennis Coach from 1961-1966. Coach King was the first coach and Athletic Director of Belton-Honea Path (BHP) High School where he served from 1966-1972. He left BHP in 1972 to coach the newly formed Greenville Bulls in the semi-pro Dixie Football League. After giving up coaching in 1972, Sonny became the Safety Director of Clinton Mills and Personnel Director of the Bailey Plant where he retired from in 1994. He also joined the SC Football Officials and SC Wrestling Officials Associations. In 1993, he was voted the District 2 Football Official of the Year. In 2015, he was voted into the TL Hanna High School Athletics Hall of Fame, and in 2016, he was voted into the Belton-Honea Path Athletic Hall of Fame. Sonny served as a deacon in the Honea Path Presbyterian Church where he became Chairman of the Board of Deacons, taught the Adult Sunday School Class for 15 years, and was Chairman of the construction of the New Education Building. He also served as Chairman of the Board of Deacons of the First Presbyterian Church of Clinton, SC and also taught the Senior High Sunday School Class. Sonny was a member of the Clinton Rotary Club where he served on the Board of Directors for many years, was President from 1978-1979, and was voted Rotarian of the Year in 1981. In 1993, the Rotary Club of Clinton presented him with the Paul Harris Fellow Award, the highest award a club can give a member. Sonny also served on the United Way Board as Vice President, President and Campaign Chairman. He helped serve the United Way for 24 years. He was a charter Board member of the Laurens County Touchdown Club and served on the Board five terms. Sonny also served as Advisor for the Kappa Alpha Fraternity at Presbyterian College and has been a member of the Walter Johnson Club (Scotsman Club) of Presbyterian College since 1959.

The family would like to express their extreme gratitude to the Cancer Center and 7th floor nurses and doctors for the care he received while at Self Regional in Greenwood. They would also like to thank Dr. Patsy Sadler, Angela Bron and the entire staff at Laurens County Hospice for their love and support.

A celebration of Sonny’s life will be held on February 20, 2019 at 2:00 p.m. at First Presbyterian Church of Clinton. His former players will be honorary pallbearers. The family will receive friends following the service. In lieu of flowers, memorials may be sent to the Scotsman Club at Presbyterian College or to Laurens County Hospice.