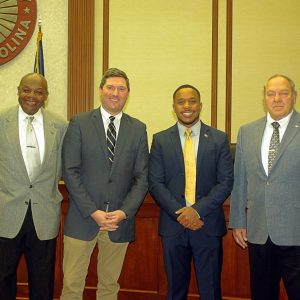 Democratic candidates Garrett McDaniel and Bobby Gregory, Sr. were invited to take part in the forum. Gregory did not attend the event, while McDaniel outlined his platform in front of about 30 people Monday night at the Historic Laurens County Courthouse.

Laurens mayoral candidates Nathan Senn and incumbent John Stankus were also invited and spoke at the forum for the first time in anticipation of the March 5 municipal elections as was Johnny Kelly, who is seeking election to Seat 3 on the Lauren City Council.

McDaniel outlined his H.E.L.P. – an acronym for Healthcare, Education, Local Government Fund and Preservation – platform. McDaniel said he wants to push for Medicaid expansion in South Carolina, something that has been rejected by state leaders since the inception of the Affordable Care Act.

“Some of the things that happen in Columbia, you don’t necessarily see the effects on people the next day. In our communities,  a budget shortfall can be catastrophic to people here – EMS, fire, police force –if we don’t have the money we can’t provide the service.”

Though Gregory did not attend the Democratic forum, he did speak Friday night at a forum for all candidates hosted by the Laurens County Farm Bureau. Gregory reiterated his stance against predatory lending and support of the working class and seniors who are struggling to make ends meet.

GOP candidates Michael Seymour and Scott Horne also attended the event and were invited to speak after McDaniel. Horne gave a brief synopsis of his campaign platform, and Seymour introduced himself before wishing luck in the Democratic Primary to McDaniel.

Senn kicked off the forum, answering questions from moderator and WLBG morning anchor Randy Stevens. Senn said he decided to challenge Stankus because he believes Laurens is not realizing its potential and needs to help build a better quality of life to bring and keep residents to the city.

“Around a quarter of the population in the City of Laurens lives below the poverty level,” Senn said. “We can’t expect our small businesses to do well if people who go to those businesses are so cash strapped that they don’t have room in the budgets to support them.”

Senn criticized the city’s work with Retail Strategies, a consulting firm contracted with Laurens for $13,000 annually to help bring retail businesses to the city, saying that as mayor he would put a local face on recruiting businesses to the area.

Stankus, who is seeking a second term as mayor, said he was running on his record and defended the partnership with Retail Strategies, which he said has helped bring several restaurants such as Taco Bell, Arby’s and Chic-fil-A to Laurens.

Part of his record includes fiscal responsibility, he said.

“We have over $600,000 in the local fund balance,” Stankus said. “We have built that balance up over the last four years simply by department heads taking care of the budget. … I look at every purchase order that comes across that desk over $500.”