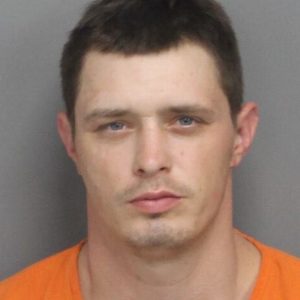 Deputies from the Laurens County Sheriff’s Office had to fish the subject of a car chase out of Lake Greenwood Wednesday.

Jerry James Brown, 33, of Cross Hill attempted to evade deputies after being spotted in an allegedly stolen car out of Greenwood.

According to the LCSO, deputies attempted to pull over the vehicle, but Brown, who was driving, refused to stop. The pursuit ended when deputies disabled the car on Todd Quarter Road in Waterloo.

After being forced to stop, Brown jumped off of a bridge and into the water. Even after deputies surrounded him on the bank, the LCSO report says Brown refused to come out of the water.

Deputies borrowed a boat from a local resident and arrested Brown without further incident. EMS was called to the scene to treat Brown after he spent an extended period of time in the cold water.

Brown was transported to Johnson County Detention Center and charged with failure to stop for a blue light, receiving stolen goods, unlawfully carrying a firearm and driving under suspension.

“Several citizens in the area came out to make sure our guys were okay, and one person allowed us to use their boat to apprehend this criminal,” said Laurens County Sheriff Don Reynolds. “I can’t thank these people enough, and it’s a perfect example of our community coming together to put these criminals behind bars where they belong. I hope criminals read this article and know we will not tolerate this type of illicit activity. The citizens of Laurens County will continue working alongside the Sheriff’s Office to make our County a safe place to work and raise a family.”