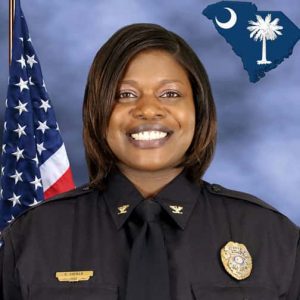 WJMZ, 107.3 Jamz FM, is honoring one Upstate Black History Maker each day during February, which is Black History Month. Cofield was the honoree for Monday, Feb. 4.

“I was so honored. It was very nice,” Cofield said.

She received a nomination for the honor, but said she doesn’t know who nominated her.

“Chrissie Cofield embodies many – if not all – of the characteristics we look for in an Upstate Black History Maker, including perseverance, faith, action, leadership and dedication to the betterment of herself and those around her,” the announcement of Cofield’s selection read on the WJMZ website. “But was her seemingly incessant work towards her goals and her determination to lead by example that cause us to believe she was quite worthy of the honor of this distinction.”

On its website, the radio station published a short autobiography that summed up Cofield’s life and career in her own words.

“At the age of 19, I was your average statistic. Young black female, who grew up in a single-parent household who was now a single parent,” Cofield wrote. “By all accounts, I was not supposed to “make it.” After some self-reflection, I realized I deserved better, my child deserved better, my mother who worked three jobs at different points absolutely deserved better. So I leaned on my God and asked him to lead me. I stepped out on faith and became a police officer.”

Through the first few days of Black History Month, the radio station has also chosen Pamela Sims, president and CEO of SHARE, a community action agency in Greenville, Spartanburg rapper/minister/entrepreneur Reginald Jones (aka Reggie Rocc), Mauldin dance studio owner and instructor Willena Pressley, who leads the Imani School of Dance, and WJMZ radio personality Tone Hollywood for his philanthropic efforts throughout the Upstate.