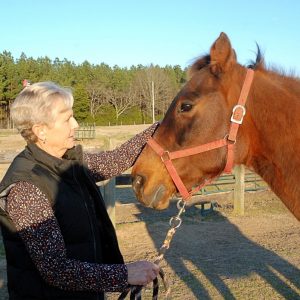 Charlotte Strickland with her horse, Della. (Photo by John Clayton)

Della, the 24-year-old American Quarter Horse and retired broodmare shot this past week in a Clinton pasture, is recovering well from four small-caliber bullet wounds.

But the horse’s owners are still outraged and continue to offer a reward of up to $5,000 for information leading to the arrest and conviction of those responsible for the shooting.

Della is wearing a blue wrap on her right foreleg where she was hit by a bullet. Another pass-through wound near the top of the same leg is healing nicely, Strickland said.

She also said Della has started to eat again after losing her appetite for around 24 hours after the shooting. She is still on antibiotics.

According to Strickland and her son, Michael Strickland, the mare was in a back pasture near a barn and well off the Highway 56 when she was shot.

“We think she was eating over at that hay ring,” Charlotte Strickland said, nodding toward a feeding area about 50 yards from the barn. “None of the horses would go over there for a couple of days after it happened and after they went back, you could tell they were really nervous.”

The shooting comes at the same time as a bill that would make acts of animal cruelty and bestiality a felony is making its way through the U.S. House of Representatives. Two representatives from Florida have reportedly introduced the Preventing Animal Cruelty and Torture (PACT) Act.

Laurens County has been home to several high-profile animal abuse cases over the past year, including the discovery of more than a dozen Chihuahuas found shot to death in Gray Court and the starvation cases of Champ and Courage, two dogs who languished nearly to the point of death before being rescued.

Reynolds had harsh words for the culprit or culprits involved in the shooting of Della.

“This is such a disturbing case,” he said in a release from the Laurens County Sheriff’s Office this past week. “This kind of assault is from an individual who I feel is also capable of assaulting and or abusing any person of any age. We are asking the public for their help in identifying the person responsible for such a horrendous act of violence upon an animal.”