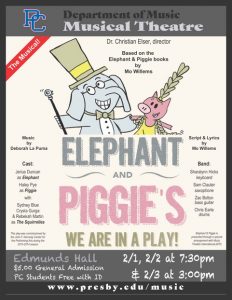 Clinton resident and Laurens District High graduate Crysta Gurga is among the small cast of Presbyterian College students in this weekend’s production of “Elephant & Piggie’s ‘We are in a Play!’” and the one-act show is open to the public for $5 general admission. 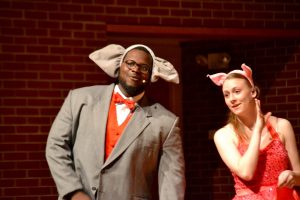 Jerius Duncan as Elephant and Haley Pye as Piggie are among the Presbyterian College students performing “Elephant and Piggie’s ‘We are In a Play!'”

“It’s about friendship and friendship doesn’t mean you have to look the same or like all of the same things,” said Dr. Christian Elser, associate professor of music and director of the PC Musical Theatre & Opera program. “It’s about caring and respect for the differences that make us all unique.”

The musical is being presented by the PC Musical Theater program, which is part of the Department of Music. The cast includes Jerius Duncan as Elephant, Haley Pye as Piggie, along with Crysta Gurga and Rebekah Martin as The Squirelles. The band features Sharalynn Hicks on keyboard, Sam Slauter on saxophone, Zac Bolton on bass guitar and Chris Earle on drums.

The one-act production follows best friends Elephant and Piggie during one day. There is a brief conflict and resolution before the characters realize they are in a play. The music is fun and accessible with styles ranging from swing to traditional rock ‘n’ roll.

“There’s some audience participation, and it’s a lot of fun,” Elser said.

On Feb. 1 and Feb. 5, the cast will perform for more than 600 kindergarten through 2nd graders from Laurens County District 56 on Friday and Tuesday mornings, and Elser expects that for many of the children, it may be their first exposure to live theater.

“I remember as a kid how amazing that was to see live theater,” Elser said. “This is the stump speech I give to so many people in this day and age: I say, ‘Just go. Straight play, musical theater, whatever.’

“There is something so transformative about just being part of a living, breathing production that film doesn’t give you, that television doesn’t give you — because those are passive forms. With theater, you are active, sitting up in your seat, engaging in real people doing something real and I almost can’t explain it. You have to go.”

The public and children and adults of all ages are welcome to attend. Tickets are $5 each for general admission and PC students are admitted free with a student ID.