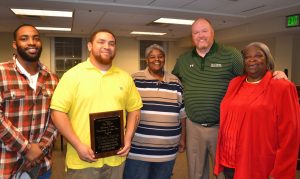 Photo by Judith Brown OWES IT TO QUINCY – Chuck Smith was surrounded by the family of his cousin, the late Quincy Cook, when he was surprised Tuesday with the inaugural Quincy Cook Volunteer of the Year Award by the City of Laurens Parks and Recreation Department. Pictured from left are Cook’ son, Quindarrius Young; award winner, Smith; Cook’s sister, India Cook; LPRD Director Jason Pridgen and Cook’s mother, Mary Cook.

A volunteer of the year award presented Tuesday night at Laurens City Council was as much about the award’s namesake, the late Quincy Cook, as it was about the recipient, and that’s just how award-winner Chuck Smith of Laurens wanted it.

“I remember that phone call in 2011, when (Quincy) said he remembered I played football and he was coaching this team and he could use my help,” Smith said of his cousin, following his surprise at being called in front of Laurens City Council to accept the inaugural Quincy Cook Volunteer of the Year Award. “I can’t accept this award without talking about him, because I’ve been doing this for seven or eight years because of him.”

The award was presented by Jason Pridgen, director of the Laurens Parks and Recreation Department. Smith thought he had been asked there solely to talk about Cook, and he was ready and willing to do just that, starting with recounting that first call for his assistance.

It was 2011 and Cook told his young cousin that he had volunteered to coach football, and he could use his help since Smith had recently played football for Laurens District High.

“But I wasn’t there anytime and he threw me in there, and said, ‘I’ll let you take over now,’” Smith recalled, admitting that later he understood what Cook was doing, and that was to give him a larger purpose in life than just going to work each day.

Cook’s impact on the department is greater, however, because of the way he got Smith involved at an impressionable age.

“Chuck was young and needed guidance and I think that’s why Quincy called him, and since 2011 Chuck’s been a pivotal part of our department,” Pridgen said. “He’s only 29 and didn’t yet have a kid in the program.”

Pridgen said Smith does so much more than just coach the children in every sport, but he also checks with them about their studies, and makes sure they’re staying on track.

Smith said it’s all because of the lessons he learned from Quincy Cook.

“He was a loving, caring man and he was a very big piece of baseball season and I miss him,” Smith said.

“I’m looking forward to serving this community because these kids need a father figure and I plan to keep being there for them.”

Smith and Pridgen both told stories of parents and students who still ask about Cook’s families and express the continued loss.

“This has changed my life for the better,” Smith said. “As long as I have breath in my body, I’m going to keep on helping support this community.”

This will be the first of many volunteer awards because the parents and other volunteers are so important, Pridgen said.